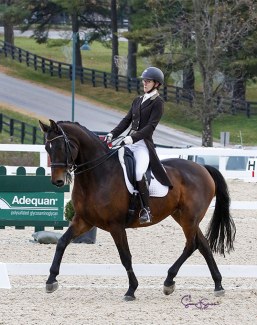 On the final day of competition at the 2021 USDF Dressage Finals in Lexington, KY, two last titles at FEI level were to be won at Prix St Georges level. Amateur Ashlee Watts and professional Kevin Kohmann claimed that honour.

Capping off an incredible weekend of competition was the highly-competitive Prix St. Georges Adult Amateur Championship, where Ashlee Watts (Region 9) saved the best for almost last in a field of more than 30 combinations, moving to the top of the leaderboard with 68.088% to earn the coveted Janine Westmoreland Malone Perpetual Trophy (presented by USDF) aboard her 13-year-old Danish Warmblood gelding Hampton (by Blue Hors Hotline out of Madigan L, by Maraton x Drum Head xx).

“My horse is just so good and absolutely amazing,” said an emotional Watts, who works as an equine orthopedic surgeon in College Station, Texas. “We’ve been together since he was five and we won the First Level title here in 2016, so it’s crazy to be here now. We were outside today in the cold and wind for our test and he was spooky and wild at first, but he just perked up and went to work for the test. I can’t say enough how amazing he is.”

Coming on the heels of their impressive Intermediate I victory earlier in the week, Kevin Kohmann of Wellington, Fla. and Equitas LLC’s 11-year-old Dutch Warmblood stallion Five Star (by Amazing Star out of U-Padoeska PB, by Jazz) returned to the ring to once again earn a decisive victory, this time in the Prix St. Georges Open Championship to win the Miki Christophersen Perpetual Trophy (presented by USDF Region 4) with a score of 74.412%. Despite the chilly and damp conditions in the vast Rolex Arena, the talented pair seemed to dance though each movement with ease and was completely fearless as to the elements that Mother Nature presented.

On a final note, after sweeping the Intermediate II and Grand Prix Adult Amateur Championships earlier in the week, Alice Tarjan of Oldwick, N.J. (Region 8) and her nine-year-old Hanoverian mare Serenade MF (Sir Donnerhall x Duet MF by Don Principe, bred in the U.S. by Maryanna Haymon) were presented with the Lloyd Landkamer Perpetual Trophy for FEI Highest Scoring Mare (presented by Janet Foy), as well as the inaugural Verne Batchelder Memorial Trophy(presented by River House Hanoverians), awarded to the FEI highest-scoring U.S.-bred horse at the US Dressage Finals (74.928%).