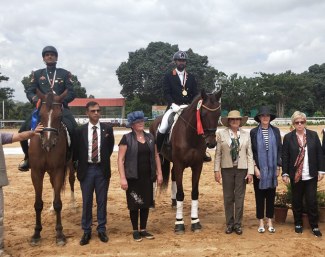 At the second ever CDI in Bangalore, India, small tour rider and show jumper Gaurav Punder qualified as a team rider for the 2022 Asian Games in Hangzhou, China.

The Equestrian Federation of India (EFI) is the main, driving force for horse sport in the country and played a pivotal role by hosting the second ever, CDI2* event at ASC Centre & College Bangalore. The federation ensured that every technical aspect was immaculately delivered for the second time on 16 - 18 November 2021.

Due to inclement weather and deteriorating ground conditions, the main arena was declared unfit to compete in the early morning on the first day of competition after very heavy rain during the night. A new dressage and practise arena were prepared within a record 3-hours time by the organisers with the ground footing properly prepared to FEI standards for the event.

This Herculean task was done at very short notice after the decision was made by the Ground Jury, which was composed of 4* FEI Dressage Judges Mercedes Campdera (MEX), President of the Ground Jury,  Natallia Rubashko (BLR), Foreign Judge,  and Mary Robins (GBR) flanked by Sari Ukkonen, Chief Steward from Finland and Col HR Sunil Shivdas as Assistant Steward. All this was accomplished by Army Services Corps under the EFI.

"It was a sigh of relief moment for all the judges and organisers when the first rider cantered down the centre line in spite of inclement weather and ground conditions at Bangalore," the President of Ground Jury said.

The OC worked very hard to overcome this flood and the riders and trainers were all happy and grateful for the effort and not having a cancellation.

With dressage in its infancy in India, the CDI Bangalore is a first major step in drawing attention to the sport. The first CDI Bangalore was hosted 27 - 29 October 2021 and the second two weeks later. This time four riders came from all over the country in time to participate in the event.

The Delhi based Gaurav Pundir won all the three small tour classes aboard the 12-year old  GSE's Escobar scored 66.127% in the Prix St Georges, 64.020% in the Intermediate 1 and 66.200% in Freestyle, which is the highest score in the country for the moment and he clears the Asian trials. Gaurav Pundir was coached by Estonian Grand Prix rider and Tokyo Olympian Dina Ellermann.

The other three  riders were Lance Dafadar Yad Ram on the 12-year old Indian bred Azad, a rider from the Indian Army;  Sudipti Hazela  on the 14-year old mare Christy; and Viveka Singh Rathore on the 15-year old Hanoverian De Galles, both civilians.

Concerning the preparation of the Asian Games for most Asian NF’s the level of dressage is an important event. This level is dictated by the technical standards set for the Asian Games which happen once every four years.  "Much credit to ASC Centre and College to be positive and make it possible," Natallia Rubashko added.

These CDI’s are the basis on which the NF will select its team for the Asian Games at Hangzhou at China in September, 2022.