India's Entry into the International Arena with First CDI in Bangalore 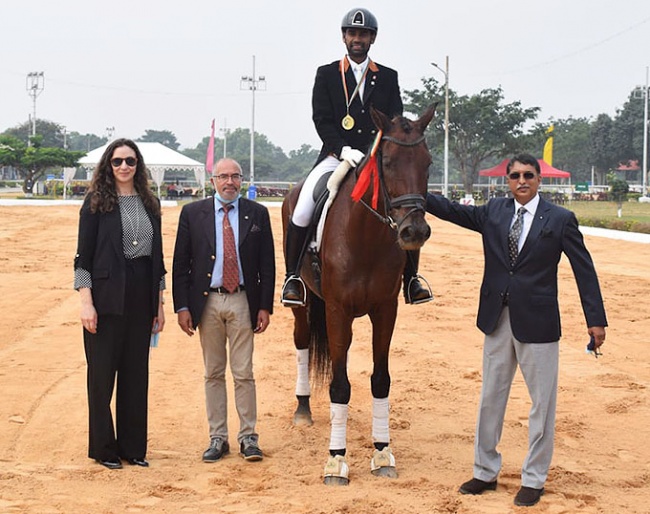 The Equestrian Federation of India (EFI) added a feather to its cap by hosting its very first international dressage competition in Bangalore on 27 - 28 October 2021.

The Army, which is the main driving force for horse sport in the country, played a pivotal role in staging the CDI with the Army Services Corps hosting the event at its base in Bangalore and ensuring that every aspect of the CDI was immaculately delivered.   Three Dressage arenas were set up and the show grounds properly prepared for this inaugural event.

"All this was done at a very short notice," said retired colonel and Asia's only 4* dressage judge Sunil Shivdas. "Judges and stewards were contacted from all over the globe. It was a herculean task, but all this was accomplished under the able aegis of the EFI."

Indian judge Shivdas served as President of the ground jury and was flanked by Fouad Hamoud (ALG) as Foreign judge and Agne Uzdavinyte (LTU)  completed the panel of three. In the absence of a local Dressage Steward, Katarzyna Widalska, a highly accomplished Level 3 Dressage steward from Poland was flown in for the event.

Although several Indian dressage riders are based in Europe and competing internationally there (Anush Agarwalla, Shruti Vora),  the CDI Bangalore welcomes a humble field of three Indian based new comers to international dressage sport.

"It was a proud moment for the country when the first rider cantered down the centre line on the 27 October, 2021 in Bangalore," Shivdas admitted.

The Delhi based Gaurav Pundir was the winner of all the three small tour classes aboard the 12-year old KWPN bred GSE's Escobar by Vivaldi x Jrt Set D), with the prefix standing for Gulab Singh Equestrian.

In Preparation of the Asian Games

In India,  like most Asian NF’s the level of Dressage is the small tour. This level is, by and large, dictated by the technical standards set for the Asian Games which happens once in four years.

"It is a known fact that a majority of Asian countries move their horses out of the country only for the Asian Games. In the absence of local EDFZ’s,  countries have to quarantine their horses in a foreign country before they reach the venue of the Asian Games," Shivdas explained. "All this comes at a huge cost to each NF, all of whom are developing nations with a shoe string budget. In Asia it is only Japan that organises competitions at the big tour level and has domestic participants."

India will be organising a further four CDI’s between November and March 2021-2022.  These CDI’s will be the basis on which the NF will select its team for the Asian Games at Hangzhou at China in Sep 2022.

The NF is also keenly watching its riders who are competing abroad," Shivdas added.