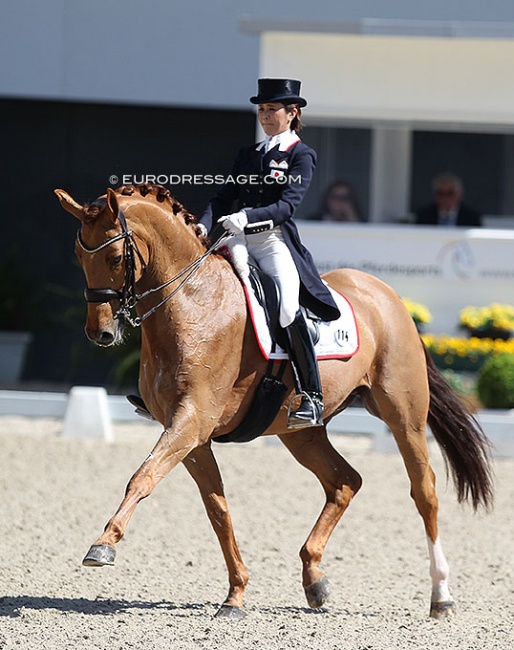 The Japanese owned Grand Prix horse Chupa Chup AS has come full circle and returned back to Sweden, where he was first competed.

Chupa Chup AS is a 14-year old KWPN gelding by Sorento out of Vidermarka (by Fidermark). He is bred by Orlanda Dragman in The Netherlands.

Chupa Chup AS first came into the spotlight in Sweden as a young horse being trained by Moa Grodinger, who placed 12th in the 5-year old division at the 2012 Swedish Young Horse Championships.

A year later, it was Mads Hendeliowitz who steered the horse to a 7th place at the 2013 Swedish Young Horse Championships, before Danish born Jacob Norby Sorensen took over the ride for new owner Patricia Florin.

Sorensen and Chupa Chup made their CDI debut in 2015 in Malmo in the small tour but got disqualified for "not confirming with many rules" according to the FEI. Seven months later they showed at the 2016 CDI Stadl Paura. In 2017 the pair moved up to Grand Prix level and competed at the CDI Uggerhalne, where they posted 66.840%.

Chupa Chup moved to Germany to Patrik Kittel's stable to be sold. Under Swedish Malin Nilsson he did a national show in Ankum in October 2017, winning the Grand Prix. The horse sold to Japanese Masihiro Kosaka (owner of Eddieni) shortly afterwards.

The ride was allocated to Japanese Olympian Yuko Kitai as her 2018 World Equestrian Games hopeful. They made their debut at the Aachen Dressage Days in April 2018 and competed in Leudelange, Verden, and Cappeln, but were not selected on the Japanese team for Tryon.

Kittel climbed back on board for one CDI in Flyinge in September 2018, riding the horse to 71.022% in the Grand Prix. It was the horse's last international. Two months later Nilsson rode him once again in Ankum.

Chupa Chup returned to the arena in 2021 with Kosaka in the saddle, first in a national show in Wellington, Florida, and later in May in Redefin, Germany.

Chupa Chup AS has now returned back to his stable in Sweden as the new ride for Swedish junior Laura Laustsen, who trains with Jacob Norby Sorensen.

The chestnut gelding moved to Sweden a month ago and the new pair made its public debut last weekend at the CDI Stockholm in a clinic.

"We are still getting to know each other, and having so much fun together," said Laura. "Almost a month together have past and more yet to come."