Superb Drops Out, Morricone to Substitute in 2021 Louisdor Cup Finals 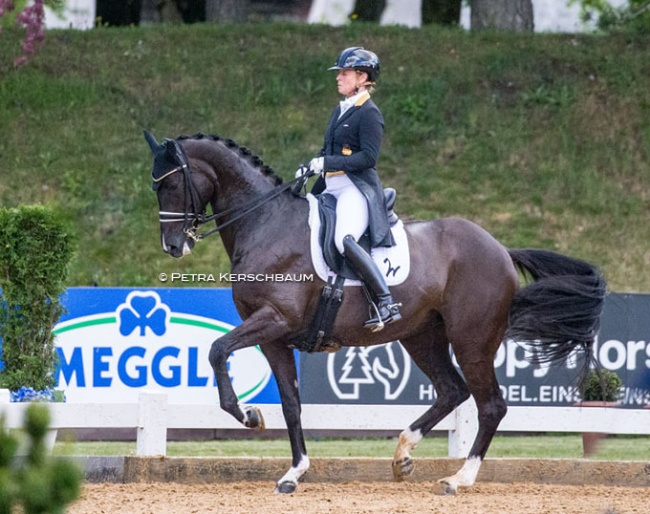 Isabell Werth will not be riding Superb in the 2021 Louisdor Cup Finals at the CDI Frankfurt on 16 - 19 December 2021. The pair will be replaced by Lena Waldmann on Morricone.

Schafhof Connects, the organizer of the CDI Frankfurt, confirmed to Eurodressage that Superb has dropped out and her spot will be filled by Morricone.

The Louisdor Cup is a show circuit in Germany for developing Grand Prix horses with a finals in Frankfurt. The highly prestigious circuit has been used by riders from across Europe as a stepping stone to Grand Prix.

Six qualifiers were held this spring and summer season in Germany. The top two ranked combinations at each qualifier are eligible to ride in the Finals. This year the qualifiers were in Hagen, Münich, Kronberg, Bettenrode,  Ising, and Oldenburg.

At the first one in Hagen in April she was fourth with 72.474% (behind Dedale de Hus, High Five, Valesco, and Amplemento). At the second qualifier in Munich she won with 75.535%. It was the mare's last show (so far) this year.

The bay mare is owned by Werth's sponsor Madeleine Winter-Schulze, who purchased her as a 3-year old at the 2015 Hanoverian Autumn Elite Auction for 250,000 euro.

The 9-year old Morricone is by Millennium/x Rubin-Royal x De Niro x  Rubinstein I. He is bred by Heinrich Vahle and owned by Gestüt Bonhomme.

Under Lena Waldmann the black stallion was fifth in the 2019 Nurnberger Burgpokal Finals, the Developing PSG Horse Championship.

The pair competed in the Louisdor cup circuit for the first time in the first qualifier in Hagen in the Inter II and won the class, but pulled him from the actual qualifier two days later. At the Kronberg qualifier they were 8th in the warm-up round (69.658) and again did not ride the finals round. At the last qualifier in Oldenburg in October, they were fourth in the Intermediaire II with 71.632%. Due to footing issues, the Inter II was named the qualification class at this show.

Yesterday Morricone won his first classic Grand Prix test at the regional show in Redefin, where he scored  74,5 % for the victory.

The finalists for the 2021 Louisdor cup are: