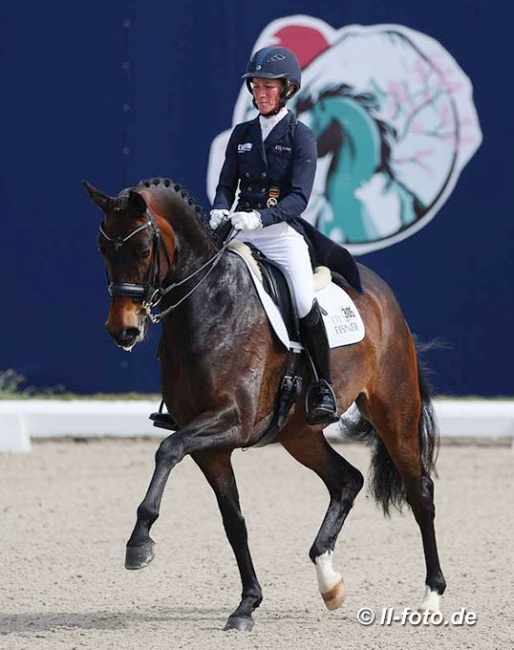 There was no way past Helen Langehanenberg (GER) in the final qualification for the Nurnberger Burgpokal qualifier for dressage riders. The German Olympian placed first and second.

Aboard the eight-year-old Hanoverian mare Schöne Scarlett she was in front in the qualifier and relegated her stable mate, Straight Horse Ascenzione (by Zack x Don Schufro), to second place. Langehanenberg and Schöne Scarlett (by Scolari x Londonderry) rode first into the arena and set the bar high, their 76.244% remaining unmatched. With this victory the first contestant for the Final in the Frankfurt Festhalle has been confirmed.

Langehanenberg is justifiably proud of the mares’ performance, "Both are amazing. I am looking forward to everything that is still to come with the two of them."

Sönke Rothenberger and his young horse Fendi (by Franklin) placed third with 74.146% ahead of Ingrid Klimke and the American co-owned Firlefranz (by Franziskus) on 73.317%.

The highly popular Louisdor cup show circuit for developing Grand Prix horses has been used by many German based and even international dressage riders as a springboard towards the classic Grand Prix tour.

A warm up round with the Intermediaire II is ridden to determine the group that can go to the qualifier for the finals, which is a Short Grand Prix class.  The qualifier was won by Swedish Malin Wahlkamp-Nilsson.

The Dulmen based Wahlkamp-Nilsson steered Masahiro Kosaka's Oldenburg gelding Dedale de Hus (by Don Juan de Hus x Furst Heinrich) to victory with a 74.674% score. The pair was already successful last year in the Nurnberger Burgpokal Final in Frankfurt, where they finished fifth. Two days ago, they already topped the warm-up round, Intermediaire II, and they pulled out all the stops in the actual qualifier, placing them 2% ahead of the runner-up.

"He has so much fun with it, on the centre line he was almost too hot for me, I was still thinking, 'Ho, wait'," said Malin after her test. "He wants to do you every favour in the test, he's a cracker to ride."

Isabell Werth presented her rising hope Superb (by Surprice x Donautanz) for the first time to the public at Grand Prix level and landed fifth place with 71.884%.

In the warm-up round, Nilsson and Dedale de Hus actually tied in first place with Lena Waldmann on the licensed Oldenburg stallion Morricone (by Millennium x Rubin Royal). The black stallion did not compete in the final round. Owner Bonhomme Stud had planned from the beginning that the successful stallion Morricone was only to compete in the qualifier. Not even the victory in the Inter II on Saturday could change their decision.