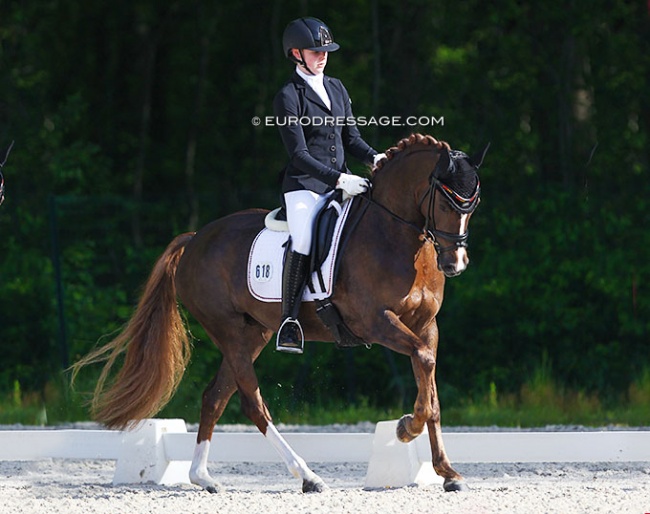 The German reserve pony champion of 2021, Dabia Dior, has been sold to the Isbruch family as a future FEI pony hopeful for Hannah Isbruch.

Dabia Dior is a 7-year old Westfalian mare by D-Day ouyt of RM Valentina (by Valido's Highlight). She is bred by Anja Maier and was originally named RM D-Siree

The pair placed sixth at the 2017 Bundeschampionate. In 2018 she returned to Warendorf and won bronze in the 4-year old mares and gelding class.

Dabia Dior sold to Matthias Kohnle for his daughter Maleen.

Maleen and Dabia Dior made their show debut in April 2018 in Olfen-Vinnum, won the 2019 Westfalian Young Pony Championships in Munster-Handorf and scored silver at the 2019 Bundeschampionate in the 5-year old division.

In 2020 they moved to L-level (FEI pony level) and placed 11th at the German Pony Championships.

They made their international debut in 2021 at the CDI Opglabbeek in Belgium, where they finished second in the team test. They also competed at 2021 Preis der Besten, where they finished fifth, the CDI Compiegne and the German team selection trial for the european champiopnships at the CDI Hagen. They were 15th in the team test and moved up to a fifth place in the Kur to Music, but were not selected on the highly competitive German team.

They had their sportive revenge at the 2021 German Pony Championships in Darmstadt, where they won silver behind European Champion Rose Oatley.

Dabia Dior will now continue her sport career under Hannah Isbruch. Her parents Frank and Sonja acquired the mare from the Kohnle family.

The sale was already negotiated at the beginning of October, but the agreement included that Maleen would continue to ride the pony until her last show, the 2021 Aachen Youngsters CDI. This happened last weekend, where Maleen and Dabia Dior placed 7th in the Kur to Music with  75.583%.

In 2021 Isbruch has been competing ponies Steendieks Dodi Lafajette (by FS Don't Worry x Diamant de Semilly) and Pegasus Forever (by Prometheus x Flying Dream) at national A- and L-level. She began her show career in 2017 on Der Kleine Prinz (by Foxhunter Pantheon x Boreas Ubbo).

Hannah has a big support team, getting training from Kirsten Heek, Cornelia Endres and at home from her mother Sonja and judge Stefan Luczak.