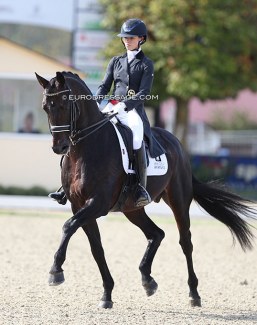 The KWPN licensed stallion Chippendale has been sold to Belgium. Marc Geerts of show jumping stable Tommelberg in Wuustwezel, Belgium, has bought the stallion.

Chippendale is a 14-year old KWPN stallion by Lord Leatherdale out of Ti Amo (by Negro x Landadel). He is bred by P. van de Brandt in The Netherlands.

Chippendale is KWPN licensed and approved for Oldenburg, Rhineland, Hanover and Bavaria.

Originally owned by Van Olst Horses and Wenmoor Stables, the dark bay stallion was first competed by Spaniard Severo Jurado Lopez, who worked at Van Olst at the time.

Chippendale was the 2012 KWPN Stallion Competition winner and represented the KWPN studbook at the 2012 World Championships for Young Dressage Horses in Verden, where he finished 16th in the consolation finals.

He made his international FEI level show debut under Anne van Olst at small tour level at the 2014 CDI Hagen and also showed at the 2014 CDI Roosendaal. At that point he was registered with the FEI as owned by Van Olst.

In 2014 Bahraini Noora Al Khalifa paid 1.5 million euro for a 50% ownership of Chippendale.  The idea was for Chippendale to be Anne van Olst's 2016 Rio Olympic hopeful and in case of no Rio the horse would be sold. The horse did not qualify for the Olympics but didn't sell either.

Further financial issues between Van Olst and Al Khalifa led to Chippendale being seized by the Dutch court in April 2015 and a year-long legal battle ensued. At the end of 2017 the stallion was no longer in escrow and returned to Van Olst stables.

Come Back, Sold to Belgium

For six years Chippendale disappeared from the show scene but he made his come back under Charlotte Fry at the CDN Nispen on 10-12 July 2020. The pair competed in an Intermediaire II class.

A week later, on 27 July 2020, Chippendale was officially registered with the FEI as owned by the Belgian show jumping stable Tommelberg.

"We have a commercial show jumping breeding farm," Geerts told Eurodressage. "Our investments in the dressage world are more private and as a hobby, and we don't plan to commercialize this or step into the spotlight with it."