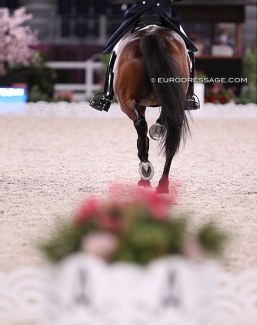 Pippa Cuckson, one or if not the best equestrian journalist in the world, is never afraid to put the finger on the sore spots in the sport. Her article of 13 December on Horse Sport is hitting the nail on the head as she rightfully points out that countries with no discernible riders or athletes can swing major policy decisions.

Cuckson states that "ghost votes" from countries with no athletes at the highest echelon of the sport, the Olympic Games, can determine the future of the sport.

"Yet 81% of UIPM member countries last month supported the removal of riding, as per the UIPM board’s demand, rather than first trying to improve riding skills," Cuckson wrote.

"It is widely thought that many of the 70 national federations (NFs) who voted to continue with three/no drop score have not/will never produce a single Olympic rider," Cuckson argued.

"There is exasperation and anger that the views of expert, practising horsemen continue to be quashed by newbies who don’t know enough yet to evaluate the pros and cons for themselves. It may be how other sports do it, but only equestrianism has the welfare of an animal to consider," Cuckson stated.

The same democratic voting system is also applied for the election the chairs of the FEI discipline committees.

At the 2021 FEI General Assembly, Mexican judge Maribel Alonso won the election with 69 votes, followed by Martin Richenhagen with 24 votes, and Helgstrand with 9 votes.

Supporters of Richenhagen claim that the dominating dressage nations (mostly European countries) voted for the German businessman to head the FEI Dressage Committee and claim that Alonso had the support of the smaller, exotic dressage nations.

As the vote is secret, the truth of the matter will not be known.

Especially the Olympic team-of-three format has caused much upset amongst show jumpers with a further press conference on the matter at the 2021 CHI Geneva last weekend.

For dressage the format of a team of three has worked very well and brought excitement and more unpredictability to the discipline, which is generally considered dry and boring by outsiders.

The team of three for dressage has met with little resistance in the dressage world, except from the already strong dressage nations (Germany, USA, Denmark, Great Britain, Holland) who rather see their chances for medals supported even more with an additional rider and drop score. However they  wave the banner of animal welfare rights to give more weight and ethics to their claim.

In addition the argument of those "strong" dressage nations that a team of three puts too much stress on the dressage horses and goes against animal welfare, gets totally undermined when the same top riders see absolutely no problem in fielding their Olympic horses six weeks later at a European Championships, and another few weeks later at the first World Cup Qualifier in Denmark or Saab Top 10 dressage competition in Stockholm, where the money purse works as a pot of honey.

For the FEI the team of three is a package deal, it counts for all three Olympic disciplines - dressage and jumping and eventing.

"The IOC will not increase the overall number of equine starters above 200 (jumping 75, eventing 65, dressage 60.) So the only way to admit more countries at Tokyo was by reducing team sizes from four riders to three ‒ hence no dropscore," Cuckson wrote. "It was simple math, combined with the faint hope that newer countries might at least be able to scrape together three riders rather than four. We were told the IOC had instructed the FEI to “change or be changed.”"

Cuckson added that, "knowledgeable people warned that no drop score would oblige riders to keep going when their horses were in difficulty for the sake of the team, and that “new” countries would be greatly overfaced by Olympic jumping and eventing tracks (...). This all came to pass in Tokyo, though the impacts were most apparent in jumping, less so in dressage and eventing. This has resulted, so far, in the jumpers alone continuing the fight."

The FEI's democratic voting system - one vote per NF - is based on Swiss law. However, there are other sports which have a "weighted voting system" (tennis, swimming), or have less involved countries serve an “associate” spell of membership before they earn full voting rights.

Cuckson thinks this system will not happen in the FEI: "Could the FEI “demote” inactive NFs or alter the voting rights of existing members by statute? Yes, but a statute change requires a two-thirds majority vote and of course no-one is going to vote in their own disenfranchisement!"

She questions the FEI's efforts to increase the membership of countries which horse-unfriendly climates, or war-torn territories where there is no urge to develop horse sport.

Cuckson concludes, "Of course, there may have been a sincere desire to spread the joy of horsemanship to remote corners of the world; or to show the IOC that equestrian is global; or simply to guarantee enough votes to pass rule changes or policy decisions that the leading nations are likely to oppose. It’s probably a combination of all three. But having such a large bloc of unsophisticated voters also brings the serious risk they will lose the plot."

Read the full article on Horse Sport with many more details and quotes to support her argument.