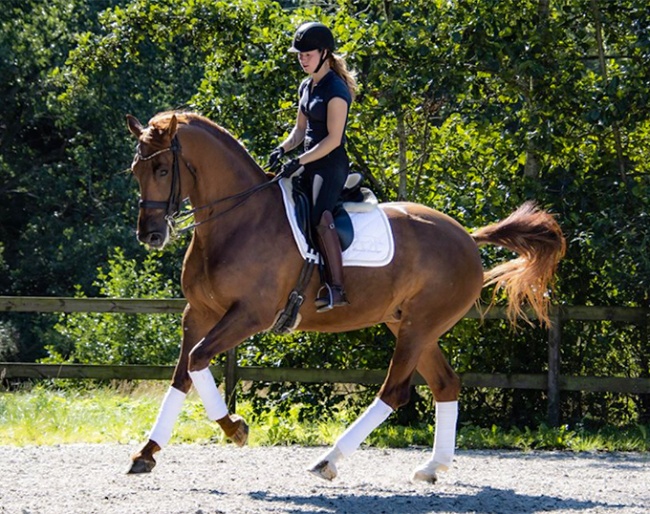 Hufflepuff Firfod is a 7-year old Danish warmblood mare by Sezuan out of Hopsa Firfod (by Michellino x Chopstick). She is bred by Morten Plenborg.

The 175 cm standing mare was first competed as a 4-year old by Simone Hoppe, before selling to Mette Brandt.

Brandt and Hufflepuff made their show debut in September 2019 riding in the 5-year old young horse classes. They did one show, then took a two year competition break and returned in 2021 at LA-level.

The liver chestnut Hufflepuff has now been sold the Munch Sinding family, who are best known for owning the Atterupgaard brood farm. Instead of exclusively sticking to horses from their own breeding project, Cornelia found a new equine partner in Hufflepuff from the renowned Danish breeding farm Firfod. Cornelia also rides the 4-year old home bred Atterupgaards Damaskus.

The 15-year old Munch Sinding made her international show debut on ponies in the late spring of 2021, after placing 12th at the 2020 Danish Pony Riders Championships.

She has been campaigning two FEI ponies internationally - Terbofens Charico (by Charivari x Contendro) and AJ Don't You Forget About Me (by FS Don't Worry x FS Golden Highlight). Her first CDI was in Hagen in June, followed by Grote Brogel in July.

Her scores made her draw the attention of the Danish selector and she qualified on the Danish team for the 2021 European Dressage Championships in Strzegom, where she and Terbofens Charico won team silver and finished fifth in the Kur to Music finals.

Cornelia will be in her last year on ponies in 2022, but will already get her feet wet on horses will Hufflepuff.

"I'm looking forward to my future with him," said Cornelia. "My thanks to my parents for the opportunity."