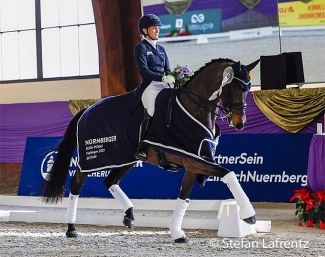 For the second year in a row, the Burgpokal finals were held at the CDN Kronberg at Gestut Schafhof instead of at the CDI Frankfurt. Due to strict covid hygiene rules in Germany the organization of the big indoor CDI Frankfurt, open to the public, was unfeasible. The Finals moved to Kronberg where a national show behind closed doors took place, just like in 2020.

Ascenzione Ascends to the Top

Helen Langehanenberg and the 8-year old Danish mare Straight Horse Ascenzione (by Zack x Don Schufro) won the Finals with 77.268% after already confirming form in the warm-up round which she led with a 76.975% test.

In the Finals three judges had the pair first one second and one placed them fourth. The marks were quite in unison as they ranged from 76.097% to 77.926%

Ascenzione was awarded a silver medal at the Danish Warmblood Elite Mare Show in Vilhelmsborg as a 3-year old. In 2018 Danish U25 rider Victoria Vallentin competed her at the World Young Dressage Horse Championships in Ermelo, where they finished 8th in the 5-year-old Finals after placing second in the consolation finals. She sold to American Tiffany Goldman in the autumn of 2018 and has been in training with Langehanenberg since November 2018. The new duo competed at the 2019 World Young Horse Championships in Ermelo and were fifth in the 6-year old finals after placing third in the consolation finals.

"This success in the Burgpokal has polished up my record in this competition considerably," said winner Helen Langehanenberg. "My best result, third place, dates back to 2006 with my unforgotten "Resi" (Responsible OLD). Not that I haven't presented a whole series of top horses, such as Suppenkasper, in the BurgPokal in the meantime, but I have never stood right at the front. And the icing on the cake: I was able to celebrate this success with Zoni's owner Tiffany Goldman and her husband. Both of them have now seen their mare live again for the first time - after fifth place at the 2019 World Championships for Young Dressage Horses in Ermelo, because Corona was coming in spring 2020."

Langehanenberg also placed second in the Burgpokal finals with Ascenzione's stable mate, the 8-year old Hanoverian mare Schöne Scarlett (by Scolari x Londonderry).  Bred and owned by Heidi Bouws, the bay mare was third in the warm-up round with 75.39% and moved to second place in the finals with 77.000%. The judges had her ranked between first and third place and the scores ranged from 75.000£ to 78.658%.

"Today was Christmas - no, actually Christmas, Easter and birthday together," Helen stated after winning the Burgpokal Final. "What "Zoni" and "Scarletti" conjured up in the hall sand of Kronberg was simply fantastic. Dancing with Horses ... Both delivered. First and second place in the Burg Cup Final! Almost a bit crazy: an internal stable duel between two really exceptionally talented mares. And me in the saddle. No, rather on cloud nine!`$"

Langehanenberg has been riding Schöne Scarlett for almost two years. She was first trained and competed by Johannes Geibel, before moving to Philip Hess. In 2018 it was Leslie Rohrbacher who continued to produce her and they were successful on the 2018 Bundeschampionate show circuit, winning the Uder qualifier followed by a silver medal in Warendorf. In 2019 they were 12th in the Bundeschampionate finals. In February 2020 Bouws had moved the mare to Inka Rossek, but that partnership was very short-lived. Schöne Scarlett was moved again to Helen Langehanenberg, who made her show debut on the mare in Nottuln at the end of May 2020.

Flying straight from the World Cup qualifier in London to Frankfurt, Hof Kasselmann's head rider Frederic Wandres had a very busy week campaigning two horses in Kronberg on the weekend of 18 - 19 December 2021.

Aboard Hof Kasselmann's 9-year old Hanoverian gelding Quizmaster (by Quasar de Charry x Velten Third) Wandres was second in the warm-up round with 75.487% and ended up third in the Finals with 75.463%. He ranked between second and fourth place with scores going from 73.780% to 76.097%.

"Making this trip possible last week was a great teamwork," said Wandres who competed Grand Prix horse Duke of Britain in the CDI-W London the day before the Burgpokal weekend. "There were so many helping hands in the background for organizing everything in detail. Lars Ligus was riding Quizzi at home in preparation for the finals. He did a very good job. Our plan worked out very well - with two second place ribbons and a fantastic third place for Quizmaster in the Final of the Nürnberger Burgpokal."

A hot favourite for the title, German Olympian Dorothee Schneider and Gestut Fohlenhof's Bavarian mare Salvina (by Genesis x Rubin Royal) did not find their groove in Kronberg. The mare was spooked by the shadows on the ground from the sun streaming through the windows and the black mare did not get settled. She was withdrawn from the final round.

"Absinth gave it all he got," said Schürmann. "We are only a combination for half a year and that makes me even prouder of him. He showed two confident rounds that were almost mistake free and each time got over 75% and twice a fourth place. At the end we also won the equitation price so that was the icing on the cake."