Firlefranz and Finley Drop Out, Salvina and Caracciola MT Step in for 2021 Nurnberger Burgpokal Finals 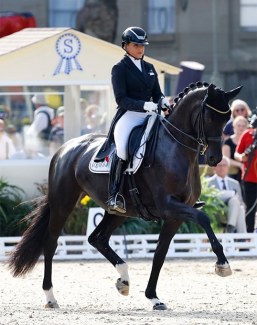 The 2021 Nurnberger Burgpokal Finals, Germany's developing Prix St Georges horse championship to be held at the CDI Frankfurt on 16 - 19  December 2021 sees several changes in the line-up of starters.

Two horses have dropped out of the finals and been replaced by the next two highest scoring horses in the qualification tests.

The Nurnberger burgpokal show circuit features twelve qualifiers and the winner of each is eligible to compete in the finals, which will be held during the CDI Frankfurt.

The substitution rule for the Burgpokal Finals reads: "a ranking list based on the percentage of qualification test is kept for the entire duration of the season. Substitutes will be nominated after the last qualification according to this ranking list."

"The replace(ment) goes not automatically on the next one from the show," Silvia Hosea of the Nurnberger Insurance explained to Eurodressage. "It is about looking (at) all the scores from all the shows." In the end they base the substitution on the highest achieved scores in the finals test at the qualifiers

Ann Christin Wienkamp and Anne Haggenmüller's 8-year old Westfalian Finley (by First Selection x Ehrentusch) were the winners of the Balve qualifier with a score of 76.293%.

Unfortunately a riding accident a few weeks ago, is keeping Wienkamp sidelined. She had to undergo a small operation to repair a tendon. She will not be fit on time to ride in Frankfurt.

"My operation went really well and I have already started physiotherapy," Ann-Christin told Eurodressage. " However, it takes about 14 days until I can ride again and then of course I can't start directly by 100 percent. The preparation time is simply too short to achieve a top result, as Finley has shown nationally and internationally during the year scoring round 74-76%. And when I show this horse, I want to show it at this top level too."

Finley's vacant spot, however, has been allocated to Dorothee Schneider with Gestut Fohlenhof's Bavarian mare Salvina (by Genesis x Rubin Royal) who scored 74.829% to place second behind Nicole Wego on Citation in Ludwigsburg.

Initially it was announced that Schneider would replace Finley with her second horse, Schleier's Swiss bred stallion Flashback (by Franziskus x Sir Donnerhall), but his highest qualification score was only 73.976%. Nurnberg confirmed to Eurodressage that they had mistakenly looked at the 75% which he had scored in Ludwigsburg in the warm-up round.

"Of course Salvina must be the starting horse. We had a mistake in the ranking list with the 75%," Hosea confirmed to Eurodressage.

At the final qualifier this season in Schenefeld, Ingrid Klimke won aboard the 8-year old Westfalian gelding Firlefranz (by Franziskus x Rapallo), owned by Klimke, Joan Johnston and Joanna Crilly. They scored 75.293%.

Schafhof Connects confirmed that Klimke will not be seeking to ride Firlefranz in the finals and has been substituted by the runner-up, Danish Daniel Bachmann Andersen aboard Sissy Max-Theurer's Holsteiner stallion Caracciola MT (by Chin Champ x Calido). He was the runner-up in Schenefeld with 74.024% and in Munich (76.634%).

In Schenefeld, he tied on the same score as Rose Oatley on Rock Revolution (by Rock Forever x Davignon), but the tie was broken in favour of Bachmann.

Who Could be Next?

The next horses potentially in line for substitution are De Massimo and D'Alessandro.

At the qualifier in Görlitz, Marcus Hermes finished second on Schrödter's Westfalian stallion De Massimo (by Dankeschön x Show Star) on 74.463%.  The highest ranked combination in Balve, which has not yet qualified for the Finals, is fourth placed pair Hubertus Schmidt on D'Alessandro, a 7-year old Hanoverian stallion by Don Frederic x Stedinger. They scored 74.439 %

The finals for the 2021 Burgpokal are: