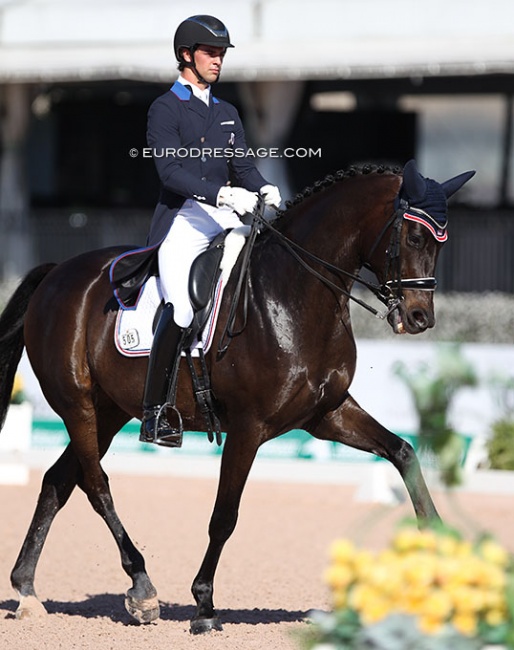 Week eight of the 2022 Global Dressage Festival (AGDF) in Wellington, Florida, wrapped up on Sunday, March 6, as the "Palm Beach Derby" week came to a conclusion.

Christian Simonson (USA) and Zeaball Diawind sealed their dominance of this week’s two-star small tour, posting their third win from three starts in the Intermediate I Freestyle CDI2*, presented by CabanaCoast. The 19-year-old rider has a harmonious bond with Christina Morgan’s 10-year-old gelding by Fürstenball, and together they posted 76.575%. Their high score, 78.75% from H judge Cesar Torrente, came courtesy of a nine for music and pepperings of eights throughout the test.

The pair won three gold medals at the North American Youth Championships in 2021, with a record-setting freestyle score, and a year ago were still competing in the under-25 ranks. They have successfully navigated the enormous step up from youth competition, making their presence felt with consistently high scores. This was their second senior CDI, and they have won all but one of their five small tour tests. Luuk Mourits (NED) slotted into second with a 70.525% personal best on Harmony Sporthorses' Sarotti OLD, by Sarkozy.

In the morning’s Intermediate II CDI2* class, Switzerland’s Barbara Bertschinger claimed the winner’s sash with 66.206% on Sonnenberg’s Solisco CH. Not only does the Swiss rider own the 15-year-old by Sancisco, but she bred him herself out of a Brentano II dam. This is the pair’s first season at big tour level after making their international debut together in 2017.