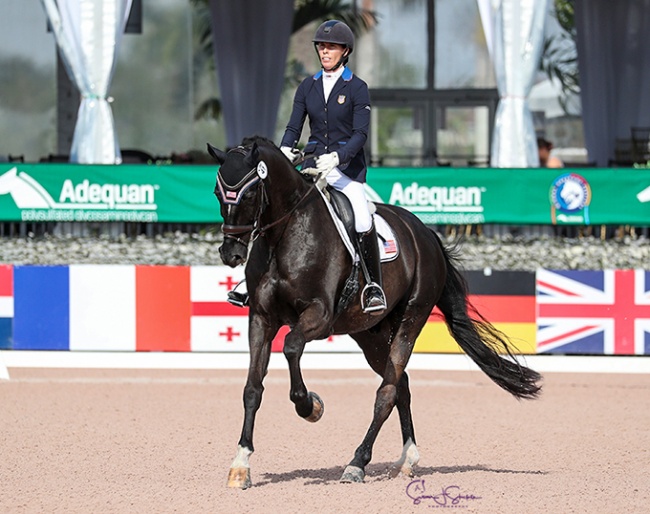 Kate Shoemaker (USA) and her trusted partner Solitaer 40, who she owns with Craig and Deena Shoemaker, got the day started as first to go in the CPEDI3* FEI Para Individual Grade IV class. On par with their performance in yesterday’s first day of competition, they earned an overall percentage of 74.146% to claim the top spot once again.

Shoemaker and “Soli” have represented the United States at the 2018 FEI World Equestrian Games Tryon, but their more recent Paralympic experience as a member of the bronze-medal-winning team in Tokyo really brought their partnership to a new level.

“Since Tokyo was so far away compared to WEG, it really taught us a lot about each other and allowed me to trust him that much more. It showed me that when I want to go for it, that I can, and he’ll be there for me,” reflected Shoemaker.

At 15 years of age, Shoemaker feels like the Hanoverian stallion by Sandro Hit x De Niro is coming into his own.

“I feel like he’s finally growing up,” she said laughing. “It’s been really cool this week. He walked off the trailer and just walked nicely next to me, which he has not done ever. I think he’s just really starting to look at me and say, ‘Okay we can do this together,’ and it’s the most incredible feeling.”

Soli’s more poised demeanor carried over into his tests as well. While Shoemaker has spent a lot of time with him working on the power in his gaits, this week they were focused on their harmony and showing off Soli’s strong points. Their plan was successful with judges Anne Prain (FRA) at E, Carlos Lopes (POR) at C, and Adrienne Pot (USA) at M unanimous in their determination.

“I was really pleased that the judges were happy with us this week, because I couldn’t be happier with my horse. He just gave me the most incredible special feeling, and I loved it,” expressed Shoemaker.

Rodolpho Riskalla (BRA) and Rigaudon Tyme finished in second place. They improved on their performance in the CPEDI3* FEI Para Team Test Grade IV, this time scoring 69.919% with an impressive walk tour. Third place went to Genevieve Rohner (USA), the youngest globally classified rider at 14 years of age, who finished her test on a positive note aboard Sam Bartlett’s Phoenix Gwyngalet for an overall percentage of 57.020%.

Screnci and the 15-year-old KWPN gelding by Sir Donnerhall I x Carabas have only been together since May 2021, but they clicked from the start. At their first competition together after having only known each other for four weeks, the pair earned two wins at the Perrigo Tryon Summer Dressage CPEDI 3*. Over time their relationship has continued to flourish.

“We’re meant for each other. It’s one of those things where it’s a once-in-a-lifetime kind of horse, and I’m very blessed to have him,” said Screnci. “He’s just an amazing, amazing animal. He’s got so many different gears, and it’s so much fun. Every day when I get on him, I learn something new.”

Screnci doesn’t want to rush her plans for the competition season and is tempered in her approach to the rest of the year.

“I’m going to take it slow this year,” she said. “I’m not trying to push for anything in particular. We’re actually going to be starting to ride some able-body classes to get more ring experience. We’ll see what happens when it comes time to make some decisions as to whether or not we want to pursue anything at that point.”

Charlotte Merle-Smith (USA) continued her winning week with hers and Susan Merle-Smith’s Guata, an 11-year-old KWPN mare by Vivaldi x Haarlem. In the CPEDI3* FEI Para Individual Test Grade III, they improved on their performance from the team class, this time earning 71.226%. They were more consistently marked throughout the individual test compared to the team test, but their straight, square halts were still the highlight.

As if one personal best was not exciting enough for one week, Jody Schloss (CAN) and her 18-year-old Dutch Warmblood gelding Lieutenant Lobin (Lobster x Fanal Prydsholm) shattered their team score and previous personal best of 70.953%, earning a new personal best of 73.095% in the CPEDI3* FEI Para Individual Grade I test. They were never marked below 6.5 from any of the judges, and finished with a bang, receiving two eights and a nine in their final pass down centerline.

Sydney Collier (USA) lead off the Grade I class with All in One, owned by Going for Gold LLC and Katie Robicheaux. Collier and the 13-year-old Hanoverian gelding by Abanos x Dauphin were extremely consistent once again in their performance for an overall score of 65.953%, finishing in second place.

Beatrice de Lavalette (USA) was already having a stunning week, but her performance on both of her mounts in the CPEDI3* FEI Para Individual Champ Grade II class upped the ante. Both horses, owned by Elizabeth and Nicolas de Lavalette, had the distinction of achieving personal bests. With Sixth Sense, a 12-year-old Oldenburg gelding (Sir Donnerhall I x Florencio), de Lavalette earned an overall percentage of 73.137%. Not to be outdone by his barn-mate, Clarc, a 15-year-old KWPN gelding by Dreamcatcher x Lord Sinclair I, scored 75.294% for the blue ribbon.