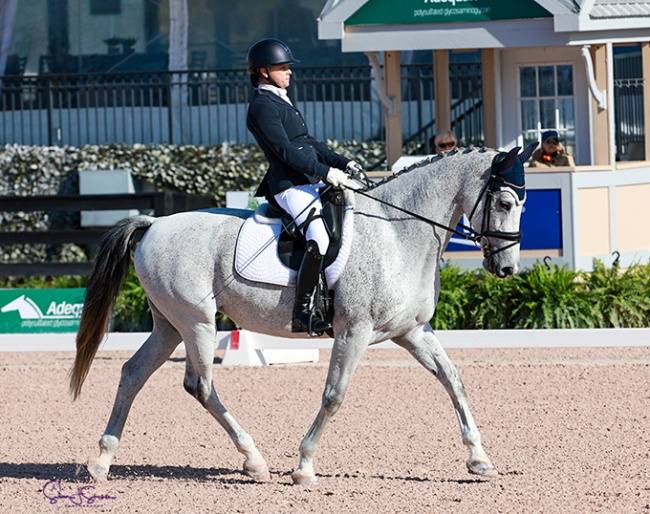 The 2022 CPEDI 3* Wellington came to a musical conclusion on Sunday 13 March with the Para Freestyle Tests Grades I-V.

It has been an exciting week nine of the Global Dressage Festival (GDF) in Wellington, FL, sprinkled with personal bests from several riders throughout the featured CPEDI3* classes, and the final day of competition was no exception.

Charlotte Merle-Smith (USA) and hers and Susan Merle-Smith’s Guata have gotten better and better with each test this week, scoring 69.559% in the Team Test Grade III test and then 71.226% in yesterday’s Individual Grade III test. On the final day of competition, they struck the right chord, earning a personal best of 74.489%.

Merle-Smith has been partnered with Guata, an 11-year-old KWPN mare by Vivaldi x Haarlem for almost two years, and in that time their relationship has continued to blossom.

“I couldn’t be more thrilled to have my horse. I’m so honored to ride her, and I feel like we have only scratched the surface of what we’re going to have,” said Merle-Smith. “It’s just been an awesome week. I really feel like ‘Gigi’ and I are having fun together now. She felt great today. In the test she just felt so available and so ready to do whatever I asked.”

Gigi and Merle-Smith are in Wellington for the season training with Ruth Hogan-Poulsen. Hogan-Poulsen, who specializes in developing freestyle choreography, helped mastermind Merle-Smith’s test set to the “Ladyhawke” movie soundtrack.

“You can tell Gigi really likes the music. It fits her really well. Even when I’m riding daily, Ruth will say, ‘Okay, now sing your song,’ so I can sing it in my head to keep my rhythm and keep the energy up,” explained Merle-Smith.

Prior to an accident which left her paralyzed from the waist down, Merle-Smith was an accomplished three-day eventing athlete. As such, she worked and spent all her time in the barn. When she got hurt, she was forced to take a step back from that lifestyle she loved so much. A true competitor, she has made her way back to the forefront of equestrian sport as she and Gigi make their bid for the FEI Para Dressage World Championship in Herning, Denmark.

“I’m so happy to actually be back to working at a barn,” expressed Merle-Smith. “It’s awesome because when I got hurt, it felt like I got ripped out of that. Now, I’m back there at the level I was before, and I’m in the barn every day. It has just been amazing for my riding.”

She continued, “I would love to make the team to go to Denmark, but if I don’t get that, I’m going to go to Lamplight for the [U.S. Dressage Festival of Champions].”

At the concluding awards ceremony after a spectacular week, Merle-Smith was overjoyed and filled with gratitude.

“I am so happy. I have the coolest horse. I have the most awesome team. My mom, who helps me at every show, is here. Plus I have Ruth and the girls at the barn who help me too. I’m just so, so happy,” she enthused.

Earlier, Kate Shoemaker and Solitaer were fine tuned in their freestyle for the Freestyle Grade IV class. The 2020 Paralympian and the 15-year-old Hanoverian stallion by Sandro Hit x De Niro, owned by Kate, Craig, and Deena Shoemaker, never scored below a seven and received numerous eights from each of the judges. Their performance crescendoed to a personal best of 77.808% for the blue ribbon. From their top rides over the three days of competition, Shoemaker and Solitaer 40 earned the overall championship title.

Cynthia Screnci (USA) finished her week on a high note with Sir Chipoli, scoring 66.200% in the CPEDI3* FEI Para Freestyle Grade V. Screnci and the 15-year-old KWPN gelding by Sir Donnerhall I x Carabas she owns with Volado Farms were rewarded for their consistency, especially in the canter work.

In the CPEDI3* FEI Para Freestyle Grade II Beatrice de Lavalette (USA) and Elizabeth and Nicolas de Lavalette’s Sixth Sense, a 12-year-old Oldenburg gelding (Sir Donnerhall I x Florencio), jammed to a techno remix of Diplo’s Revolution. Their creative choreography and interpretation of the music resulted in a final percentage of 73.734% for the win. Additionally, de Lavalette and Sixth Sense received the reserve championship honors for their strong tests throughout the week.

Laurietta Oakleaf (USA) and Comte du Baccara C, a 15-year-old KWPN gelding by Glock’s Johnson TN x Ulrich owned by Oakleaf and Tammi Nowicki, had their most consistent test of the week for 62.600% for the red ribbon.

Jody Schloss (CAN) was all that jazz in every sense as she guided her own Lieutenant Lobin to a winning score of 73.023% in the CPEDI3* FEI Para Freestyle Grade I class. Schloss and the 18-year-old Dutch Warmblood gelding (Lobster x Fanal Prydsholm) rode to a ragtime mix which featured the musical Chicago’s All That Jazz.

Sydney Collier was close behind with All in One, owned by Going for Gold LLC and Katie Robicheaux. Collier and the 13-year-old Hanoverian gelding by Abanos x Dauphin were the last competitors to enter the stadium for the week and received eights across the board in their first pass down centerline. Their harmonious performance scored 71.045% for second place.