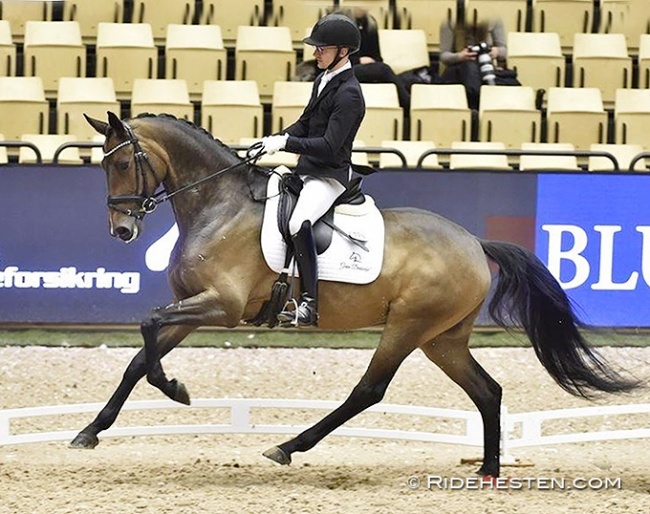 Allan Grøn and Søbakkehus Maude became the winners of the Danish Warmblood Championship for 5-year olds held at the 2022 Danish Warmblood Stallion Licensing in Herning on 9 - 13 March 2022.

Annually the Danish warmblood hosts a championships for 5-year olds during the licensing in Herning. Only DWB bred and registered horses are allowed to participate.

The Championship consists of three rounds. Two in which the horses are presented in pairs by their own rider. This year not the top 8 but the top 24 of the highest scoring horses after two rounds were test ridden by a guest judge rider, spread out over two days. Danish Grand Prix team rider Daniel Bachmann Andersen was the return guest judge rider.

Allan Grøn and Søbakkehus Maude (by Hesselhøj Donkey Boy x Wilkens) persevered in the end and won the championship, beating the overnight leader from the first two rounds, Ghandi SS, in the final with test rider.

Bachmann commented that Maude has " a really nice walk and canter. She actually surprised me positively how much power she has, and that she is at the same time easy to collect. It is a really positive horse. She feels great, in a good way. She's really well educated, Allan has done a super job. She is very straightforward to the aids, moves up through the body and is easy to collect and extend, just like I think a 5-year-old should be: fresh, fit and super in the contact. It's clearly the best horse I've ridden today."

The black mare was sixth in round one, receiving 7.5 for walk, 8.5 for trot and canter, 8 for rideability and 8.5 for potential. She also had identical marks on the second day and was back in sixth place.

St. Paris made a spectacular jump on the leader board in the test rider finals, in which she climbed to a second place overall with two 10s for rideability and potential from Bachmann.

Lyngbjergs St. Paris is bred by Bente Børjesson and owned by the rider in partnership with United Dressage, an investment company directed by Jesper Arent Jørgensen, Eskil Peter Lund,  and Christine Arent Risager.

Ghandi SS is bred by Lone Sørensen and Stevn Equestrian and owned by Helgstrand Dressage together with investor Søren Grønborg.

An interesting observation is that of the 24 horses making it to the Finals, no less than 10 are sired by Rhinelander stallion Revolution (by Rocky Lee x Rouletto).