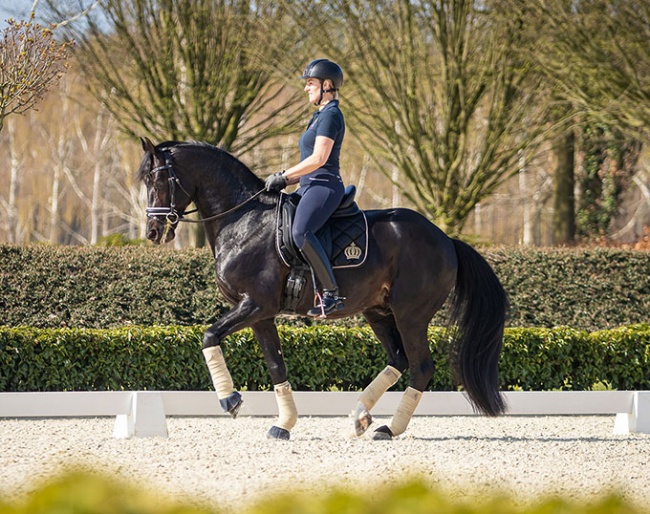 Tolegro, the first licensed son of legendary stallion Totilas, has been sold to Marie Jose Proulx and will be standing at Canadream Farm in Ontario, Canada. He will be available for North American breeders with fresh semen this 2022 breeding season.

Tolegro is an 11-year old KWPN stallion by Totilas out of Tewri (by Krack C x Ferro x Variant).

Tolegro is an eye catching stallion that impressed breeders in Europe with his charisma, gorgeous looks, correct conformation and basic gaits.

Discovered as a foal by international German Grand Prix rider Bernadette Brune, Tolegro became the first fully licensed and performance tested son of Totilas. He was approved at the 2013 Oldenburg stallion licensing in Vechta and successfully completed his 30-day Stallion Performance Testing in Schlieckau in December 2014.

As a breeding stallion Tolegro has sired offspring all around the world after filling his book with breedings in Germany, Switzerland, France, Great-Brittan, Italy, Iceland, Sweden, USA, and Australia.

Tolegro's first crop of foals arrived in the spring of 2015 and fulfilled the high expectations: His foals are beautiful and long-legged types, which have been awarded with premium titles and were sold at the Elite foal auction in Vechta.

A New Chapter in Canada

Tolegro has now sold to MJ Proulx of Canadream Farm, where he will join renowned KWPN sires Zhivago, Wynton, and Knock Out.

"am very excited that the stunning black stallion Tolegro will be joining Canadream Farm," MJ Proulx stated. " He is a beautiful homozygous black son of Totilas and the mare line that produced Negro, sire of Valegro. He delivers to breeders the KWPN blood of the most successful international Grand Prix dressage horses in recent history. Tolegro has successfully shown to Prix St Georges and was schooling Grand Prix when he sustained a career ending injury. Tolegro will be available to North American mare owners in May after his quarantine."

Tolegro is approved for the German Oldenburg society (GOV), Hanoverian, Westfalen, Rhineland, all South German breed societies. His foals are also eligible for registration in Register A with KWPN-NA.

He is WFFS negative n/n