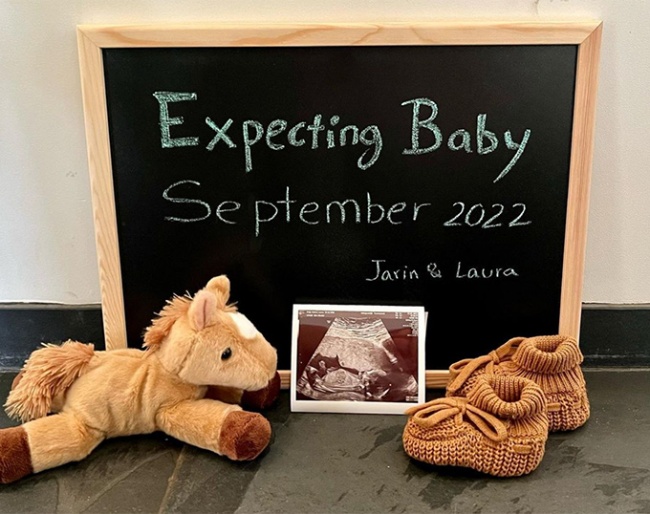 Spanish former international dressage rider Laura Reija Belart is pregnant with her first child. She and her partner, Dutchman Jarin Hoek Spaans, will be welcoming a baby in September 2022.  "Now we just hope for the best, that everything goes well and that the baby is healthy, so he/she can ride many horses in the future," Laura took to Instagram. "It totally changes my training and competition plans but this is a very exciting journey and I hope we will enjoy every moment of it!" Reija competed at four European Junior/Young riders Championships between 2006 and 2011 with Rainy, Medici and Flash. In 2013 she moved up to Under 25. Her last CDI was almost six years ago in October 2016 in Mallorca, where she rode Everest and Wobelisk. She is now focused on horse dealing in Holland.

The Dutch VDL Stud farm has purchased a share in the ownership of Paul Schockemöhle's 3-year old licensed stallion Expectation PS (by Escamillo x Fürst Romancier x Sarkozy). The black became a premium licensed stallion at the Mecklenburger Licensing in Redefin in December 2021.

Dutch young professional Franka Loos has returned into employment at Van Olst Horses. Loos decided to go independent in 2019 and celebrated a career highlight when she rode Las Vegas to a fifth place at the World Young Horse Championships, but as of 1 March 2022 she has gone back to Gert-Jan van Olst's stallion station, where she has taken on the ride on Nalegro amongst others.

Horses.nl reported that renowned American KWPN breeder and stallion owner Scot Tolman of Shooting Star Farm (SSF) has acquired the Gelderlander stallion Floris BS (by Negro x Elegant x Zichem) as his own riding horse and third addition to his stallion roster alongside Gaudi and Jaleet. The 62-year old Tolman will be riding the chestnut himself. Floris BS was competed at small tour level by Corien Yspeerd.

Less than half a year into his retirement from sport, the Dutch Grand Prix horse Aswin has passed away. Aswin was a 17-year old Dutch warmblood gelding by Sandreo out of Ulinda (by Jazz x Chronos). He was bred by G. Gijsbers and owned by  Annette Bruil.  The gelding was competed at international Grand Prix level by Jean-René Luijmes. He was euthanized in March 2022.

British Under 25 team rider Lewis Carrier (24) has proposed to his girlfriend, British based Canadian dressage rider Olivia Robertson (26). Carrier went down on one knee in the fairy lit gardens of Hogarths Hotel and Robertson said yes. "I first met Olivia properly last year at the Hagen European Dressage Championships and since then we have been near to inseparable," said Lewis. "We have been through a hell of a lot together since then and there is no one that I would rather spend the rest of my life with! Over this time I have met her wonderful family and very quickly I felt like I was one of them. I can’t wait to spend the rest of my life together creating more memories with her."

The Spanish Equestrian Federation reported the tragic loss of Elisabeth Blanco. The national dressage judge and technical director of the Spanish Youth riders, died suddenly in Toledo on 27 March 2022. Originally from Los Navalucillos, Blanco assisted in the modernisation of the structure of the Spanish youth development program. She leaves behind a baby daughter.

Ridehesten reported that Danish warmblood horse breeder Jan Opstrup passed away on 8 March 2022 following an aneurysm.  He was 67 years old. Opstrup's interest in breeding was sparked by his elder neighbour Hilmer Møller, who sold his mare Queen Damgård (by Pablo) in 1996. The next year they bought his yard, Damgården, and the gold and silver medal winning brood mares Diana Damgaard (by Donnavan) and Finette Damgård (by Scotsmann xx). The latter produced three licensed sons, including Newman (by Nobleman) and Noble Art (by Nobelman), who was 2005 Danish Colt Foal Champion.