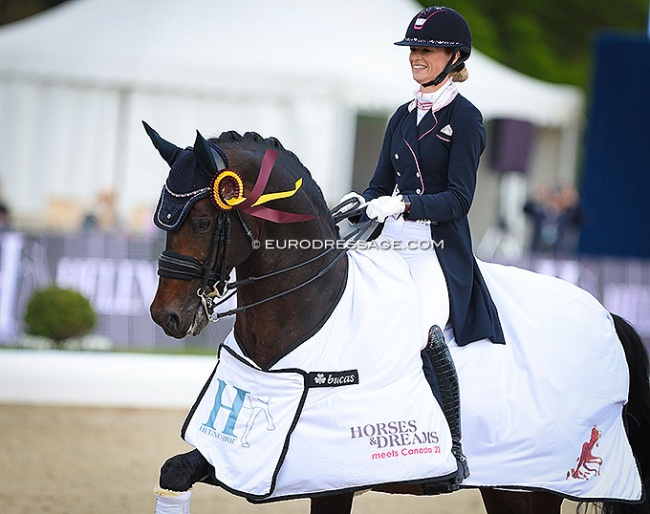 Dutch Dinja van Liere and her Trakehner cross bred stallion Hermes won the duel against homeside heroes Frederic Wandres and Duke of Britain in the 4* Grand Prix for freestyle at the 2022 CDI Hagen on Friday 22 April 2022.

The 4* Grand Prix for Kur was the feature class on Friday at this "Horses and Dreams Meet Canada" competition and with a field of twenty starters from eleven different nations the stakes were high. Judges Elke Ebert, Cesar Torrente, Christof Umbach, Magnus Ringmark and Katrina Wust sat in the boxes to assess the tests.

With a reverse draw according to the World Ranking List benefiting the already most successful riders with another advantageous starting place at the end of class, the last riders to go determined the top of the ranking. It became a neck-to-neck race between Dutch Dinja van Liere and Frederic Wandres. Van Liere persevered with a minimal point advantage of 0,674 %

Hermes' Bumpy Ride to the Top

Less than a year ago, Van Liere and Hermes were unknown to the international Grand Prix world and it wasn't until May 2021 for them to make their break through in Munich.

To secure the horse for The Netherlands until the 2024 Paris Olympics, stallion owner Joop van Uytert sold a share to Dutch investor and cheese mogul Jan Anker. The dark bay stallion's trajectory  to the top has been a bumpy round.  After winning bronze at the 2018 World Young Horse Championships as a 5-year old, he had to be retired in the 6-year old consolation finals at the World Championships a year later because he heavily resisted in the test.

His international Grand Prix career began in Hagen in April 2021 (69.391% in the Grand Prix) and a month later he wowed the crowds in Munich with a 74.174% earning Grand Prix test. The horse missed out of Dutch team selection for the 2021 Olympic Games due to an administrative error, but the KWPN bred stallion had his vengeance in Aachen last September, where he won the overall champion's title. In October 2021 he went to Herning and was third in the Grand Prix with 74.921%, in Stockholm the score dropped to 70.804% and in Doha he was eliminated in the Grand Prix freestyle, again refusing in the arena. The horse re-found its marbles in 's Hertogenbosch in March and posted 74.310% in the Short Grand Prix. At the 2022 CDI Hagen they were back on "Aachen form".

For many years this long-time believe existed in The Netherlands that Dutch riders would not get their points in Germany, but Van Liere certainly debunked that fabulation: good riding earns good points, no matter the geography.

Van Liere and the 10-year old Hermes (by Easy Game x Flemmingh) began with a left trot half pass that was better than the right one, a hesitant rein back, but good extensions. The first passage could have been more regular, but the piaffe was good. At the start of the test, Hermes really needed to be more up in the poll as he was ridden too much behind the vertical, though obedient and quick off the leg. The extended walk was clear, the collected walk too but could have shown a bit more collection. The second piaffe-passage was very rhythmical, but there was a big hiccup in the canter strike off. The tempi changes were straight and beautiful, the pirouette left was the most balanced one, the zig zag correct but could have been a bit more uphill and the final centerline was very well ridden.

German Frederic Wandres was in hot pursuit with his routinier, Hof Kasselmann's 15-year old Hanoverian gelding Duke of Britain (by Dimaggio x Rubinstein), who is bred by Sarah and the late Tony Pidgley from Great Britain.

Wandres, who returned home from having spent three months in Florida competing and selling horses for Hof Kasselmann, rode Duke of Britain to probably his best test in his career. The chestnut gelding looked so comfortable, settled and secure in the Grand Prix work. The passage was not the most engaged from behind, but Duke's piaffe were best he has ever shown. The extended canter was very well ridden even though the flying change was way too early to the marker. The pirouettes were small, the one tempi changes very correct. Duke was very willing and obedient throughout this confirmed Grand Prix ride. They scored 77.239% for second place.

Danish Daniel Bachmann Andersen presented Christian Vang Lauridsen's 10-year old Danish warmblood Marshall Bell (by Don Romantic x Michellino) and finished third with 76.261%. Since riding him on the Danish team at the 2021 European Championships in Hagen, Bachmann made much progress on the young Grand Prix horse. The extended walk was very nice, the second piaffe-passage was lovely, but the trot extensions were not entirely regular behind. The zig zag was good, and the one tempi changes ground covering. Overall, especially in canter, the horse needs to lower the croup more but it's a work in progress.

British Charlotte Fry and Van Olst's 14-year old KWPN gelding Dark Legend (by Zucchero x Tango) were back in business after the tall black gelding has a big scare in the freestyle at the 2022 World Cup Finals in Leipzig two weeks ago. Dark Legend spooked hard and several times from the TV camera, but in Hagen he had recomposed himself and was on the aids. The straight tempi changes and very well ridden zig zag were highlights. In piaffe the horse does not really sit and he is still quite hand-held throughout the test. They scored 75.543% for a fourth place.

German Semmieke Rothenberger made her debut as a senior Grand Prix rider after a successful, medal and title winning career as an Under 25 rider. She had her first senior Grand Prix start on the 12-year old KWPN mare Flanell (by Apache x Don Schufro) in Le Mans in February and Hagen was their second attempt. While the collected trot work became too passagey, the passage itself was elegant and lightfooted. In piaffe, the bay mare crosses the legs and gets very narrow at the base, indicating a not yet established balance. The two tempi changes were straight, the extended canter ground covering and the extended trots had the nose nicely out. They scored a respectable 73.152% for fifth place.

Belgian Laurence Vanommeslaghe returned home from her first tour of duty in Florida, where she had the big break through and scores from the judges she failed to get in Europe last year's spring and summer. The Paris based Vanommeslaghe fortunately continued to ride the wave of success and her super talented Grand Prix ride Edison,  a 13-year old KWPN gelding by Johnson x Balzflug, proved his quality in Hagen. They were sixth with 72.500%.