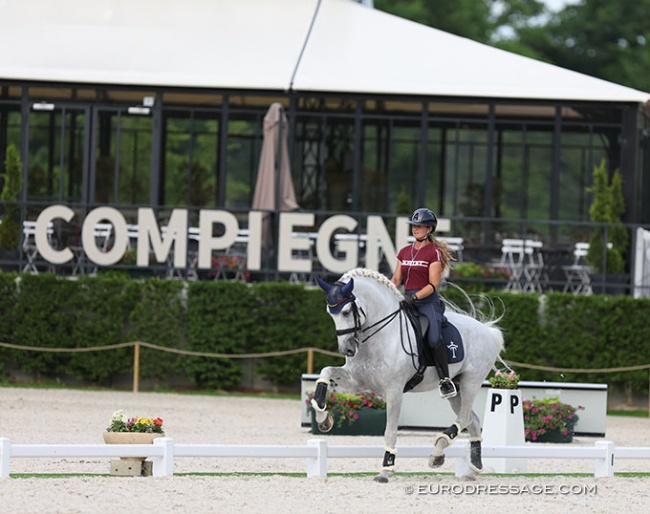 It's ready - set - go for the 2022 edition of the international dressage competition and FEI Nations' Cup in Compiègne, France.

Running for the 11th time in the Grand Parc Equestre in the French historic town an hour north of Paris, this competition has gone from strength to strength and has become a fixture on the calendar for riders from France, Great Britain, Belgium, The Netherlands, Swizterland and many more who want to saviour top sport dressage in the most picturesque setting.

For 2022 the Grand Parc equestre underwent a massive transformation which a new main stadium built on what used to be a grass park with bleachers on its edged. Now the new number one competition ring is a gorgeous arena with an orangerie, outdoor seating and a wonderful Compiegne sign which gives the ring the flair of a Championship arena, where I immediately see a European (Youth) Championship take place again.

The show kicked off with a horse inspection that featured a never-ending string of Grand Prix horses competing in the two 3* big tour classes. The 5* Grand Prix horses are trotted up on Friday. Then the small tour horses followed as well as all the horses from the youth classes.

The weather was absolutely brilliant with not a drop of rain touching down, though heavy thunderstorms were predicted. The inspection itself was smooth sailing with a few Iberian bred horses staggering by (they are never the strongest movers in the trot-up) and receiving the cry "accepted" while some moved in a questionable way. Five appeared more than tender in my eyes and one pony was visibly lame, but after two periods in the holding box and about a five total trot-ups was still "accepted" but with the strange mention "we'll watch you in the warm-up" !? Makes your wonder how visibly unlevel a horse needs to be to get a "not accepted" for competition.

After the jog, several riders trained their horses in the show rings to familiarize them with the arena.

We are ready for our favourite show of the year and are sending positive vibes into the aether for no rain on Friday, as more thunder storms are forecast after a lengthy period of drought here in Western Europe.