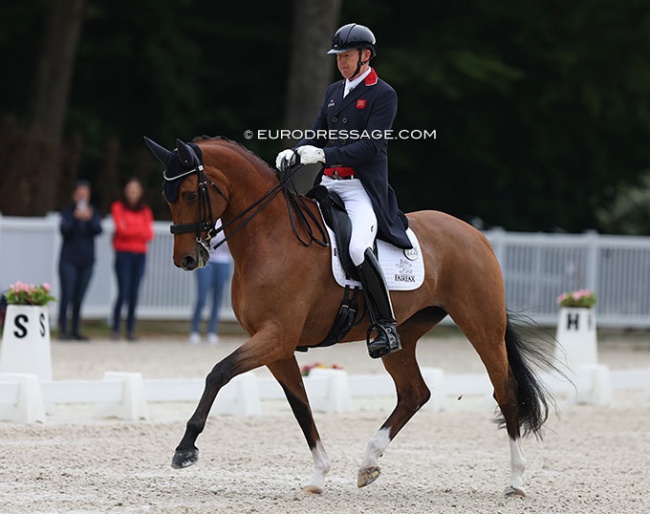 British 2019 European Championship team duo Gareth Hughes and Briolinca made a solid come back to international competition sport on day one of the 2022 CDIO Compiègne, the favourite competition of many European dressage riders which was even more anticipated this year due to a major overhaul of the show grounds.

What started as a spring dressage extravaganza with 27 °C temperature on horse inspection day, Thursday 20 May 2022, got watered down by torrential downpours of rain on Friday morning well into the early afternoon. The footing in the three arenas upheld, with especially the one in the main stadium laced with felt, coping the best. The '"old" main stadium now had the two other rings for the seniors and youth riders and struggled a bit more with the massive amounts of rain. Especially the ponies got a bit stuck on the wet surface but as soon as the sun came out after in the late afternoon, they dried up well.

Die-hard dressage lovers had to be early birds today because two of the most awaited pairs at this show - come back kids Hughes/Briolinca and debutants Dujardin/Imhotop - were going as first two starters of the day in the 3* Grand Prix for Special at 8 AM in the morning.

It was quite a juggle to cover as much as dressage as possible for this reporter/photographer, torn between the choice of photographing the beautiful main stadium for the Grand Prix for Special 3* or the old stadium, where I could kill two birds with one stone and photograph more riders, also with safe sheltering in a nearby tent in order not to ruin my equipment (and mood I have to admit).

Gareth Hughes and his wife Rebecca and Julia Hornig's 16-year old KWPN mare Briolinca (by Trento B x Royal Dance) made her long awaited come back to CDI competition after a two-year break due to injury. Her last CDI start was in 2020 at Keysoe after having been Britain's best performing horse at the 2019 Euros, but in 2020 did only one CDI in Keysoe (in October) and was not in the race for the Tokyo team due to fitness issues. The mare is now back in full work and scheduled to compete in France.

The pair rode down the centerline as first to go and posted the winning score on the board of 76.152%. Hughes rode a very conservative, confidence boosting ride in which at no point he overasked his mare. The trot extensions were a bit lacking, the passage first slightly uneven but improved throughout the test. The mare stays well on the spot in the piaffe and lowers the haunches, but has a tendency to back-step with the right front leg. The tempi changes were correct, but lacked some expression, the pirouettes were well ridden. Overall it was a very pleasing, friendly test which showed a lot of ease and peace in the work.

This Grand Prix for Special class was judged by a very experienced 5* panel including  Mariette Sanders-Van Gansewinkel, Raphael Saleh, Katrina Wüst, Elke Ebert, and Susanne Baarup. Their marks ranged from 74.674% to 78.152%.

Patrik Kittel rode Blue Hors Zepter (by Zack x Wolkentanz II) is his first outdoor show since the 2022 World Cup Finals and had the horse a bit quicker behind and fresher looking. The tall chestnut showed a superb half pass left and good trot extensions. The piaffes were nicely on the spot, but the first one crooked to the left. The tempi changes were laboured with the rider swinging too much in the saddle for a harmonious, straight and uphill expression. They scored 75.782 with marks going from 73.152% to 78.043%.

Charlotte Fry and Van Olst's 14-year old Dark Legend (by Zucchero x Tango) already had one outdoor CDI down their belt (CDI Hagen) since the  2022 World Cup Finals. The long legged black dragged his legs in the rein back and the extended walk barely had any overtrack and was tense (scores 5.5 - 6.5), but the tempi changes were as usual dead straight and the trot half passes covered much ground. They posted 73.543% for third place.

Charlotte Dujardin made her international Grand Prix debut aboard the 9-year old Dutch warmblood by Everdale x Vivaldi owned by Carl Hester and Coral Ingham. The liver chestnut was first shown by Robert Barker in 2017, by Sadie Smith in 2018, before Dujardin took over the ride in the summer of 2020. They were the 2021 British small tour champions and eight weeks ago rode their first national Grand Prix at Myerscough, scoring a winning 77%.

In Compiegne in front of an international panel of judges (no British judge), their CDI debut received 72.804% with scores from 70.109% to 74.674%. The liver chestnut gelding showed a great work ethic, ears pricked listening to his rider, but the bridle contact was quite an issue today. The extended trots were correct with good overtrack, the half passes balanced but with the hindquarters a bit trailing. The rein back was very good. In passage the hindlegs are not so strong yet to truly move under the body, the piaffes were really nicely on the spot in which Imhotep showcased his ability to really sit and take the weight, but they were still quite unbalanced with the frontlegs wide. The extended walk did not have that much overtrack but was clear in rhythm and with good relaxation. The collected walk was well ridden. There was some hesitation in the canter strike off and in the tempi changes he swung to the left. The ones were really nicely uphill though. In the left pirouette Imhotep lost the canter and the right one was small but not as expressive. Unfortunately today Imhotep was often very tight in the neck and had the mouth gaping in response to the half halts. This meddled with the overall, soft and harmonious image although the horse showcased his potential for the future.

The prize giving session for today's classes took place late in the afternoon and were a bit of a confusing matter as not the official tent, nor the beautiful orangerie was used, but just a quick announcement was made in the grandstand. Three of the top five riders didn't even bother to dress up in their competition attire for the ceremony, the press was not present (clueless they were going on with two more classes going full swing in arena B and C), and it was a bit of a failed opportunity to drive the crowds to the orangeries for more drinks, nibbles and more socialising (commercial income for the show).

While the Grand Prix for Special had 25 combinations competing, the Grand Prix for Kur in Arena A had 29 riders. The class was halted during the big downpour as a curtain of rain and lightning close by made the conditions impossible to carry on the competition. The test was delayed until 15h00 for the last half of the riders, while in arena's B and C the packed youth classes from pony level to Under 25 as well as the senior small tour kept on going until well past 8 PM. This old (ahem), tired reporter called it quits for the day at 19h40 after almost 12 hours of non stop photographing, to return to the hotel cold and hungry to write this article.. More tomorrow.