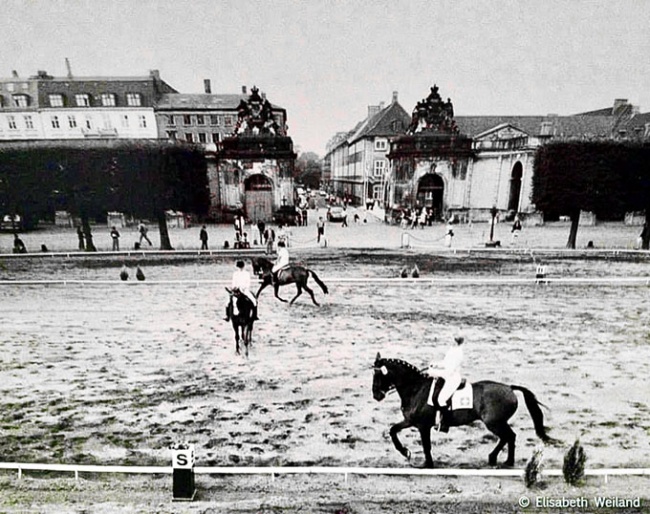 When Dr. Reiner Klimke travelled to the 1974 World Championships in Denmark he was the current European champion and it seemed a logical progression on paper to take the world title a year later. Despite the undeniable qualities which his systematic training approach had brought out of his Hanoverian Mehmed and which resulted in considerable success, Klimke still had to face criticism beforehand. The brown gelding wasn’t what people expected regarding quality and expression of a dressage star.

Copenhagen was the perfect stage to prove them thoroughly wrong.

The third official dressage World Championships took place from 14 - 18 August 1974 in the Danish capital Copenhagen and like at the Olympics two years previously in Munich the world dressage elite competed in front of a breathtaking background. While it was the Rococo castle of Nymphenburg in 1972, two years later the unique Christiansborg castle served as backdrop. This impressive castle with its huge courtyard is located in the middle of Copenhagen and still houses all three powers of its country.

The stunning setting certainly arranged that Copenhagen 1974 became the most picturesque dressage World championships to this very day and created a very special atmosphere which happens when art meets art.

The number of participants in the Grand Prix, which decided the team medals and the allowance to ride for the individual medals, was 32. Eight nations sent teams of three riders, 7 of them from Europe which was still the very heart of the sport. Although both North American countries had sent teams to Munich two years earlier, only the USA did so to Copenhagen. Canada only had Christilot Hanson-Boylen as an individual in the field. And  the 1972 bronze team medal winner - Sweden - just sent Ulla Hakanson as individual to Copenhagen.

Germany, the Soviet Union, Switzerland and Austria did not only send their three-team riders, but also an additional individual rider. The sport was growing, but still a far cry from today’s global size.

After the Soviet Union had surprisingly dispossessed Olympic team gold from the Germans on their home soil in Munich and caused a major disappointment for the hosts, the coveted medal was already won back at the Europeans a year later.

In Copenhagen the Soviet Union was the title defender from Aachen 1970 and they sent exactly the same team like back then, while Germany only had Liselott Linsenhoff’s experienced Swedish stallion Piaff (by Gaspari-Russi) from 1970 on their team.

It was pretty much expected that these two nations would ride for the team title, while the Swiss seemed able to capture bronze after they did that a year earlier at the Europeans.

While Mehmed’s critics fell silent when he won the Grand Prix convincingly, the young Swiss Christine Stückelberger’s massive Holsteiner gelding Granat (by Consul) was the surprise of the day when he came 2nd ahead of the multi medalists Piaff and Pepel.
With this ride on the just 9-year-old Stückelberger secured her team’s bronze medal. Germany’s gold was never in danger though with Liselott Linsenhoff’s Piaff great on form and 3rd behind Granat and Karin Schlüter’s Hanoverian Liostro (by Der Löwe xx) 6th.

The Soviet Union’s silver was likewise not threatened by the Swiss behind them, but their glorious three of the past years could not shine as much anymore. 18-year-old Russian Trakehner stallion Pepel (by Piligrim) with Dr. Elena Petushkova, double world champion of 1970, placed 5th, the thoroughbred Tarif xx (by Faktotum xx) with Iwan Kalita 9th and 1968 Olympic champion Ikhor with Iwan Kizimov 11th. The brown gelding (by Khobot) had been a mainstay on medal winning Soviet teams for over a decade in Copenhagen, having first competed at the 1964 Tokyo Olympics as a just six-year-old.

Bronze medalist Switzerland had the oldest horse in the field, 19-year-old Polish bred Sod (by Machandel) with the amateur rider Hermann Dür, owner of a mill near Berne.

Whoever thought the attractively contrasting pair of petite Christine Stückelberger and giant Granat would stand a chance and catch a coup of surprise were proven wrong on the last day of the championships.

Dr. Reiner Klimke masterfully piloted Mehmed (by Ferdinand x Altried) through all the difficulties of the program, demonstrating the horse’s high degree of submission and stressing the 13-year-old’s highlights. Klimke’s first world champion title (of two) was overwhelming and proved the mastership of the then 38-year-old attorney, who trained a horse that wasn’t considered a natural to become the best dressage horse in the world.  Liselott Linsenhoff’s then 16-year-old Swedish chestnut stallion Piaff, Olympic team champion 1968 and individual Olympic gold medalist 1972, executed his ride with a lot of impulsion and expression. A second individual silver medal after 1970 was the reward for the most famous and successful offspring of the legendary Gaspari. Piaff retired on a high note afterwards.

The horse’s long-time rival Pepel managed to win individual bronze for Elena Petushkova, no doubt a feat at 18 years of age and after a long international career. However, placings differed from 2nd to 7th and the Soviet Union’s sympathetic pair were just one single point ahead of the 4th place.

That crucial single point separated German individual rider Harry Boldt from a medal, just like 10 years earlier when he lost the Olympic individual gold by this margin to Swiss Henri Chammartin. Boldt could still be content as his Westfalian gelding Golo (by Grünschnabel), not blessed with the best conformation and a late starter in dressage, outclassed German team horse Liostro.

Christine Stückelberger, who would become legendary for being cool as a cucumber at big occasions, succumbed to her nerves and warmed Granat up too long which in the end cost her a medal. Shortly after Copenhagen the pair started a reign with wins at Aachen which lasted until the Europeans in 1979!

The Breeding Part At Copenhagen

While the breeding of dressage horses was far from today’s movements and refinement, the 1970s were still the beginning of a specialized breeding with the aim to produce dressage horses of nobility and with outstanding gaits. Breeding stallions that combined a breeding career with competing at international level were still an exception (Piaff’s father Gaspari was a trailblazer in that regards) and thoroughbreds were used to refine the warmbloods.

Purebred thoroughbreds were still a common picture at the international level. In Copenhagen four took part: The Soviet bred geldings Tarif xx (*1962, by Faktotum xx) and Torpedist xx (by Agonavt), the French bred former steeplechaser Cramique xx (*1959, by Lavandin xx) and the English thoroughbred Chigwell xx (by Dumbarnie xx). The first three managed to place in the top ten in the Grand Prix.

The Hanoverian breeding association celebrated the World champions Mehmed (by jumping sire Ferdinand) and Liostro (by one of the top dressage horse sires at that time, the thoroughbred Der Löwe xx). Eight of 32 horses belonged to their breeding. Among them the 10-year-old Dahlwitz, named after Willi Schultheis’ Berlin home. The gelding, who was trained by Schultheis and later Heinz Lammers, was competed by US American Edith Master. The prickly haired chestnut was by the Trakehner Impuls out of the legendary Hanoverian mare Doublette (by Duellant), Rosemarie Springer’s 1960 Olympic horse and multiple international winner with Schultheis. Another Hanoverian who came from Schultheis was the 12th placed chestnut Armagnac (by Aumund) with Canadian individual Christliot Hanson-Boylen.

The Holstein breeding association had three representatives: Granat,  the 15-year-old mare Ludmilla of young US American Elizabeth Lewis, and the grey Marquis (by Manometer xx) of Austrian Ines von Badewitz.

Traditionally at that time Sweden was one of the leading dressage breeding associations, but in Copenhagen only Piaff (by Gaspari) and Ulla Hakanson’s former jumping champion Ajax (by Jovial) started.

The three French riders all sat on French bred horses: Apart from the former steeplechaser Cramique xx (by Lavandin xx) the rather heavy boned Selle Francais Reims (by Brule Tout) of Dominique d’Esmé and Urf of Jean Paul Guerlain.

One Lipizzan crossbred, Astor of the late Hans Max, started under the Austrian flag.

Text © by Silke Rottermann for Eurodressage