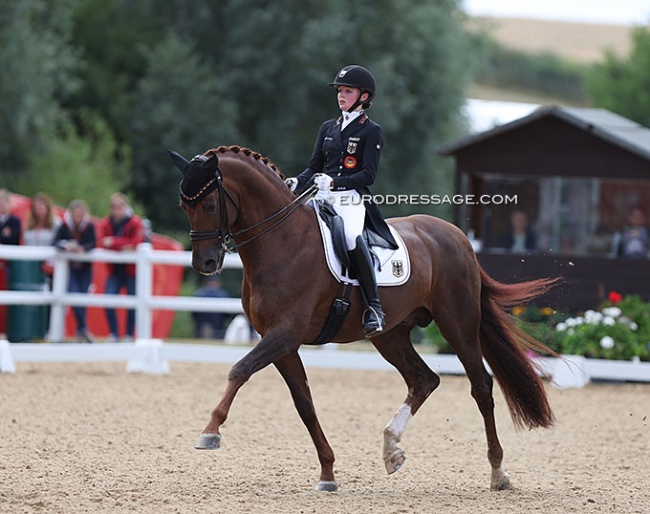 Rose Oatley and Team Germany are in the lead after the first day of competition at the 2022 European Junior and Young Riders Championships at Hartpury College in the U.K.

The competition started on Tuesday morning 26 July 2022 with the first group of junior riders - two per nation - competing in the Team Championship Test which will determine the team medals. The second group of riders will go tomorrow after which the team medal ceremony takes place.

The junior and young rider team tests started simultaneously at 9h30 in the morning as both competition arenas are next to each other with the warm-up being indoor and then one 10-minute ring outside. The sky was heavily overcast and temperatures felt particularly cool this morning (16 - 17 ° C) after a heatwave had brought Western European countries to a simmer over the past few weeks. Only past noon the sky broke open with the sun heating up the place to a mild low twenty centigrade.

Rose Oatley, the 2021 European Pony Champion who focused on horses and junior competitions this spring season, started as 17th rider to go and produced the junior high score of the day out of 27 riders: 73.303%. The class is being judged by Elke Ebert (GER), Kirsten Soegaard (DEN), Lars Andersson (SWE), Jean-Michel Roudier (FRA), and Isobel Wessels (GBR).

Oatley did not bring her number one horse, Rock Revolution, with whom she got initially selected, but her direct reserve horse Veneno, Rosalind Oatley's 11-year old Westfalian stallion by Vitalis x Diamond Hit. Rocky stayed home with a hoof abscess. Oatley produced a particularly strong trot tour as her tall liver chestnut is an impressive, ground covering mover who stayed nicely up in the frame at the beginning of the test. The trot movements went smoothly although sometimes in the collection in the corners he lost some of the self carriage. The extended walk had ok overtrack even though the horse could march more, stretching over the back. He's the type of mover that scoops up a lot of sand with his front legs in walk. The collected walk was well ridden, although there was a slight loss of rhythm in the left turn on the haunches and the right one was rather big. In canter the stallion stayed a bit croup high, but the extended canter had lots of power and forward energy. The flying changes were solidly executed. Four judges placed her first, one judge second, with individual marks ranging from 72.576% to 74.848%.

Germany collected a team score of 143.545 points, which put them first but not with a super comfortable lead ahead of perpetual rivals The Netherlands (141.061 points). The second German score came from team newcomer Carolina Miesner who placed sixth provisionally with 70.242% aboard her parents Andrea and Thomas Miesner's 11-year old Hanoverian gelding Exclusiv (by Edward x Wolkenstein II). A fun side note, sire Edward also competed for Germany at the European Young Riders Championships under Charlott-Maria Schurmann in 2013 (Compiegne). Miesner and Exclusive were third to go early in the morning. After a bumpy halt at entry they showed energetic, forward trot work, but there was a break in the rhythm of the second extended trot (score between 5.5 and 7). The rein back was well executed but there was a small loss of impulsion in the left turn on the haunches. One of the four flying changes was broken. The judges scored her between 68.485% and 71.667%.

The Netherlands On Silver Course

The Dutch team is on silver medal course at the moment with 141.061 point with the top ride coming from the first starter of the day, team newcomer Rowena Weggelaar with her mom Nelly's 14-year old Dutch warmblood gelding Don Quichot (by United x Gribaldi). The pair began with a beautiful halt at entry and the horse was always very consistent in the contact, even though there could be a bit more lightness in general. The trot work was smooth, but overall the horse needs to show more elasticity and bending in the body in the corners and on the voltes. The pair cruised smoothly through the test and finished on 71.364% which made them the runners-up of the day.

Lara van Nek and Fariska, a 12-year old KWPN mare by Vivaldi x Nourejev, are seasoned competitors to the game, after having represented Holland and winning medals at the European Children Championships in 2017, 2018 and 2019. Now a junior, Van Nek rode her very elegant and lightfooted mare a bit over tempo the entire test. The rein back was nice, but the transition from trot to walk lacked fine-tuning and was a rolling one. The walk appeared hurried but the clarity of rhythm was there. In canter the third change had a hiccup which reduced the score to a 69.697% and 8th place so far.

Austria Sees Bronze on the Horizon

Usually Denmark is expected to be the biggest bronze medal contender but not this year in Hartpury. It is Austria that sees bronze looming on the horizon after Florentina Jöbstl and her 12-year old KWPN mare Floortje (by Negro x Florencio) finished third. Jöbstl rode the mare with a lot of forward impulsion. In the extended walk there could have been more stretch over the topline and the right turn on the haunches was the better one. The canter work had four correct changes , but the total image would have been even better if it looked less rushed. In the extended canter Florentina put the pedal to the metal, losing a bit of the 3-beat rhythm, but there was certainly a lot of jump off the ground. They scored 71.273% but the judges were not in unison. British judge Wessels had her on 68.485%, while Swedish judge Andersson saw 73.030% in the ride.

Britain Hot on Their Heels

Hot on Austria's heels is the home team of Great Britain who are provisionally fourth with 139.940 points.

Team rookie Sophie Wallace piloted Ursula Bechtolsheimer's 16-year old Westfalian mare Rosalie B (by Rubin Royal x Newcastle) to a fifth place so far with 70.273%. Not sure if nerves got the better of her but Wallace also rode the trot a bit hurried which led to the mare flashing her tongue on the left side of the mouth. The extended walk was quick, but in canter there were four secure flying changes. Overall the mare could be ridden with a bit more uphill orientation. Her marks ranged from 68.030% from German judge Ebert  (15th place) to 72.121% from British judge Wessels (2nd).

Briton Myles Graham and Caroline Bell's 15-year old AES mare Nibeley Union Hit (by Nibeley Union Jack x Sandro Hit) was the first to go for his team and his test stood out by the steady bridle contact with a horse clearly chewing and producing the proper amount of foam (lipstick amount instead of some horses who were spinning white cotton candy from all the given sugar). The dark bay mare is not the biggest, flashiest mover that goes in the best self carriage but Graham tried to produce as harmonious a picture as possible. The extended walk was limited in overtrack. The second flying change needed more polish but Graham did a good job and was rewarded with 69.667% (9th) although the Swedish judge stayed at 65.606% while French judge had the high score of 71.061%.

The team championship competition comes to a conclusion on Wednesday 27 July with the second group of junior riders.