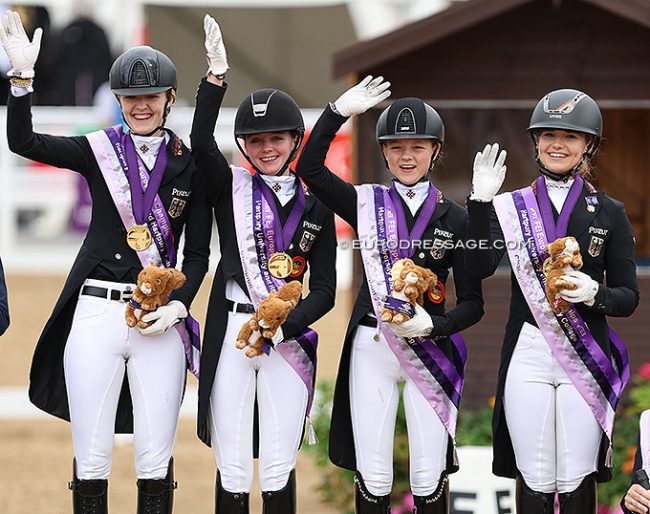 While young rider Helena Schmitz-Morkramer led the way for Germany to win team gold in the Young Riders division, younger sister Allegra was equally instrumental in carrying Germany to gold in the junior ranks at the 2022 European Junior and Young Riders Championships in Hartpury (GBR) on 27 July 2022.

Allegra Schmitz-Morkramer and her Hanoverian stallion Libertad won the Junior Riders Team Championship Test with a score of 75.758% and dominated a field of 54 junior riders. Thirteen nations participated in the team championship and Germany topped the nations' ranking with 222.243 points. Austria dropped out of the team ranking after two of four horses were withdrawn not fit to compete.

The Dutch team was in pursuit of Germany and ended up with silver on 218.576 points. The home team of Great Britain wrote history by scoring the team bronze medal with 216.879 points, the first time in no less than 24 years that a British junior team is back on the podium. Their last time was also on home turf at the 1998 European Championships in Hickstead!

Allegra Schmitz-Morkramer, the European Children Champion of 2019 on Lavissaro, made a smooth transition into the junior ranks in 2020. Aboard the 10-year old Libertad (by Londontime x San Remo) she won the 2022 Preis der Besten as well as the CDI Hagen German team selection trial. In Hartpury she launched herself as one of the hot favourites for individual gold on Friday.

Allegra and Libertad produced trot work with a soft and secure rhythm. The black stallion was elastic and relaxed in the lengthenings, but in the right half pass the hindquarters trailed. The horse could stay a bit more up in the poll. The extended walk was fairly limited in ground cover with more V-moment in the rhythm wanted (scores 6.5 - 7), but the collected was correct and the turns on the haunches were small. The canter work was very solid with four confident flying changes and nice uphill striding. They scored 75.758% with the five judges fairly in unison (marks from 74.697% to 76.667% although the individual placings were between first and fifth.

Lana-Pinou Baumgurtel and the 10-year old Hanoverian Founder (by Foundation x Sarkozy) clocked 73.182% for 8th place. The very pretty bay gelding showed expressive trot work but there was a lack of finishing touch the halt at entry was not immobile, the shoulder in left overbent and the halt for the rein back hurried. Unfortunately the walk was the weak part of the test with limited overtrack and a poor clarity of rhythm in the collected. Founder had nice balance in the canter half passes though and three changes were good; the third one late to the aids. They finished with a nice uphill extended canter.

Silver for The Netherlands

The Netherlands saw its young riders' group go from winning double team gold at the 2020 and 2021 Europeans to dropping to a 6th place in Hartpury. However, the Dutch junior equipe was steadfast and captured silver with 218.576 points.

Holland's leading junior was Micky Schelstraete aboard the 7-year old KWPN gelding Knight Rider (by Uphill x San Remo) with 73.818% (5th). The German judge rewarded the ride with 75.152%, while the Danish judge was the low score with 70.606%, quite a difference in perception. Knight Rider is a horse with a lot of shoulder freedom in trot, but the bending on the right lead could have been better. In the extended walk the horse got a bit quick in the tempo, but the canter work was well ridden with good uphill changes and striding.

Jill Bogers and the 6-year old (!) KWPN stallion Lennox US (by Grand Galaxy Win x Rousseau) placed sixth in the individual ranking with 73.394% and was the second best scoring Dutch pair. As first to go on Wednesday, the duo immediately set the bar high. Lennox U.S. is a drop dead gorgeous stallion with a lot of cadence in trot, but the trot tour lacked collection. The extended walk sufficed in overtrack, the collected walk was ok. In canter, Lennox showed sweet, soft-footed striding and the four flying changes went smoothly. They finished their lovely test with a straight extended canter.

Rowena Weggelaar and Don Quichot contributed the third score to the team result (71.364%), while Lara van Nek and Fariska (by Vivaldi x Nourejev) had the scratch result of 69.697% (21st).

For Great Britain it was a glorious day as for the first time in 24 years their juniors were back on the podium.

The British team effort was led by Annabella Pidgley, who in 2021 won double silver at the Europeans. In Hartpury she is riding her second horse Espe, an 8-year old Westfalian mare by Escolar x Dimaggio. The bay mare has an incredible engine behind with a powerful hindleg that reaches far under the body. This hyperactivity from behind is the horse's strong point, but I believe it could also be her weakness. The halt at entry was not immobile (6.5 - 7.5) and neither was the halt for reinback square (7.5 - 8). She lost the regularity in the rhythm in the right volte, but overall Pidgley produced some clear, careful riding in the light-footed trot work with plenty of energy to boot. The walk part is where the mare becomes tricky to assess. In the extended walk she displayed good relaxation and overtrack (8 - 9), but there was no collected walk shown. The mare continued to achieve more than two hooves overtrack as if in an extended walk and the tempo was just slowed down. However, instead of shortening the gait, she gets prancey in the frontleg and stiff in the back (judges scored it 6.5 - 7). It prompted me to pull up the FEI's description of the collected walk again to refresh my mind. It reads: The pace should remain marching and vigorous, the feet being placed in regular sequence. The steps cover less ground and are higher than at the medium walk, because all the joints bend more markedly. The Collected walk is shorter than the Medium walk, although showing greater activity. In canter Espe has lots of expression and activity from behind, clearly striding in the half passes. All four flying changes went well, but were croup high. Pidgley kept the mare steady in the poll, but there could be more uphill orientation in general. They scored 75.151% to place second. The judges marks ranged between 74.242% (from Swedish judge Andersen) and 76.515% (from Danish judge Sogaard).

India Durman-Mills and the 13-year old KWPN bred Escade (by Jazz x Wolfgang) were the second best scoring British pair, finishing 10th with 71.455%. The bay gelding is a totally different type from the energetic Espe, a bit more old fashioned and not with the same level of suspension in his movements, but Durman-Mills rode him in a very quiet, steady head-neck position. The trot work could show a bit more power from behind. The extended walk did not have the greatest overtrack, but the collected was very clear in the rhythm. The canter work was soft and balanced, very even and regular in the changes and half passes.

Sophie Wallace and Ursula Bechtolsheimer's Rosalie B (by Rubin Royal x Newcastle) posted 70.273% on Tuesday, which ranked her 17th. These three scores put Britain on the third step of the podium with a team score of 216.879 points.  The scratch score was still a respectable 69.667% ridden by Myles Graham on Nibeley Union Hit.

The Danish team normally has a subscription to a podium place but this year in Hartpury, Great Britain made sure a new hand of cards was dealt. Denmark landed off the podium in fourth place with 215.819 points.

The team leader was former medal winning pony rider Sophia Obel Jorgensen who made the transition to horses on the 10-year old Oldenburg bred Brilliant (by Bretton Woods x Diamond Hit). The elegant looking pair stood out with the trot work in which the chestnut gelding flashes his massive freedom in the shoulder. The extended walk was problematic though as no overtrack at all was shown (still scored 6.5 - 7 !). Jorgensen rode nice turns on the haunches and the canter work was very solid with a good activity in the hindquarters. The final halt could have been more polished. They posted 74.970% for a third place in the ranking.

Annabelle Rehn and the 10-year old Danish gelding Vestervangs Garson (by De Noir x Ragazzo) are a solid pair on the Danish team but performed a little bit below par in the team test as the funky marked bay gelding had a double spook-and-spin on the second extended trot diagonal. In trot there could have been more bending and elasticity on the right lead. The canter work was secure though and the pair still scored 70.667% for 16th place.

Knocking at the Door

One rider knocking at the door as an individual medal contender is the French Mathilde Juglaret aboard the 10-year old Lusitano Caporal de Massa (by Rieto x Xaqiero). The pair showed nice extensions, good extended walk and a well ridden right walk pirouette. Caporal has a particularly ground covering trot for a Lusitano, even though he was rushed into the rein back. The changes looked secure. They finished fourth with 73.879% with marks going from 71.818 (10th) to 76.667% (1st).

Swedish Laura Laustsen has found her match in Ellen Linden Urnes' former Young Riders' horse Fairy Tale, a 15-year old Westfalian by Friedensritter x Rosenkavalier. The gelding was a bit overbent in the left shoulder in, but he was steady in the contact throughout the test and produced a nice canter tour. They scored 71.879% for 9th place.