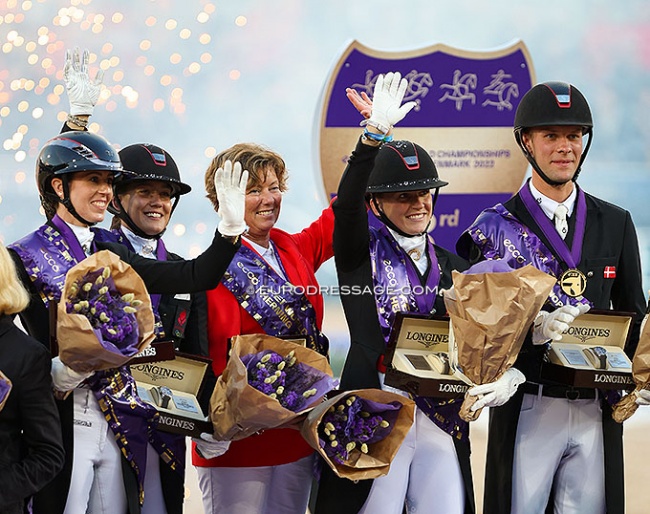 They were always tipped to take the title, and Denmark’s Nanna Merrald Rasmussen, Carina Cassøe Krüth, Daniel Bachmann Andersen and Cathrine Laudrup-Dufour lived up to the challenge in style when claiming team gold on home ground at the 2022 World Championships Dressage in Herning on 7 August 2022.

They were chased all the way to the line by Great Britain’s Richard Davison, Gareth Hughes, Charlotte Dujardin and Charlotte Fry who finished just over one percentage point behind in silver medal position while the defending champions from Germany had to settle for bronze.

As the last two riders from each of the nations in strong contention took their turn it was nip-and-tuck all the way and impossible to predict where the medals would fall until the very end. But despite the most intense pressure the Danes achieved the goal they set themselves when these Championships were first allocated to their country three years ago, earning the world team title for the very first time.

British star and London Olympic champion Charlotte Dujardin and her nine-year-old Imhotep began to turn up the heat early this afternoon when putting 77.407 on the board, and when team-mate and last-line rider Charlotte (Lottie) Fry produced a breath-taking test from Glamourdale for a new leading score of 80.839 then Team GB went out in front.

Dujardin was thrilled with the horse she calls Pete. “He’s only done three Grand Prix competitions, he’s very inexperienced and I had no idea how he was going to be in there today. I was so proud of him, I had one little blip but it was just a miscommunication more than anything, I absolutely love that horse. He makes me smile from ear to ear every day! He has so much power, so much expression, he wants to work and to please you. Now he just needs to get used to the environment and to be given some time”, she said.

She has been riding Imhotep since he was five years old. “I haven’t done big shows with him but I know him well and have a really good partnership with him”, she explained. She is taking care not to ask too much from him too soon in his career however. “It’s a fine line because he’s nine and I don’t want to overdo it, but I wanted to do enough to get enough points for the team today. I didn’t want to scare him and I felt I had a really nice ride but I can’t tell you how big everything feels. In a year or two when he can manage all that power he’s going to be spectacular!”, she pointed out.

It was Fry’s performance that firmly sealed Britain’s place on the podium however. This 26-year-old dressage athlete’s angelic expression masks nerves of steel. She didn’t hold back when it came to giving her all in the ring today, and Glamourdale relished every moment of it, leaving the crowd gasping while he racked up maximum 10 scores for much of his canterwork.

“He’s a massive showman!”, Fry said. “He and I were in our own little bubble but when the crowd clapped on the last centreline he loved it, he lifted his head and he went Wow!!”

Meanwhile Daniel Bachmann Andersen and Marshall-Bell earned 76.584 for the home side, so when Danish anchor Cathrine Laudrup-Dufour entered the arena with Vamos Amigos she knew what she had to do. She had heard the crowd hailing Fry’s spectacular performance, but she wasn’t going to let that intimidate her. She says pressure just gives her a lift.

“I’ve been dealing with it since I did my first Championship when I was 11 years old and I’m fine with it, it just brings me closer into the zone!”, she said after putting the biggest score of the competition on the board with 81.863 which would leave Denmark on the top step of the podium, but only 1.228% ahead of the British in silver medal spot while Isabell Werth and DSP Qantaz and Frederic Wandres and Duke of Britain FRH secured bronze for Germany, their final tally of 230.791 leaving them less than three percentage points further adrift.

Laudrup-Dufour was also partnering a horse that is still on a learning curve. Vamos Amigos hasn’t always been the most settled ride but he has come into his own this year.

"I managed to ride him to the limit but stay on the right side of chaotic and brilliant today," said Dufour. “He’s had a super season so far, he’s been riding a wave since Neumunster really. Leipzig (World Cup Final 2022 in April) was like riding on a bomb but I think that atmosphere might have matured him too”, she pointed out.

German star Isabell Werth has competed in seven World Championships during her sparkling career and said that she and her team “are very satisfied with our bronze medal”. Her country’s record is second-to-none with 12 titles from 15 editions of the team competition, but it’s a time of change with new partnerships emerging and others leaving the sport.

“We didn’t come here as favourites and we knew the Danish would ride for the gold. We were not quite sure about the British but Charlotte always delivers when she needs to. We had a really open championship and it was nice to see. We are not disappointed at all and we knew when we came here with new riders and horses that it would be difficult. It was a great competition and we are all satisfied with our results”, she said.

Gold for the Home Team

This gold medal means a great deal to all of the Danish team. Nanna Merrald Rasmussen, who set out the Danish stall with a great ride on Blue Hors Zack yesterday admitted the reality hasn’t quite sunk in yet. “I was shaking and so stressed when Catherine was riding. We saw Lottie (Fry) riding on our phone in the stables and saw she was amazing so we knew Catherine had to ride at her best to get the gold. To finally bring this medal home is amazing!”, she said.

The only time Denmark has ever placed on the Dressage World Championship podium was back in 1982 in Lausanne (SUI) when Anne Grethe Jensen (Marzog), Tove jorck-Jorckston (Lazuly) and Finn Sakso-Larsen (Coq d’Or) clinched bronze.

“We are all overwhelmed!”, admitted Danish Chef d’Equipe Anne-Mette Binder tonight. “We hoped to make a good impression and have a good result here in Herning for the Danish audience but also for everyone travelling here. The riders all followed the plans we had from the start and I’m really, really proud of my team today. The expectations were high and our fantastic riders have fulfilled them!”, she added.

Of the 19 competing nations Team Sweden finished fourth ahead of The Netherlands in fifth and Team USA in sixth, and the top six nations have now qualified for the Paris 2024 Olympic Games.

However attention now turns to tomorrow’s Grand Prix Special for which the top-30 individuals have qualified, and if this weekend’s team competition is anything to go by it’s going to be another gripping day of top sport.