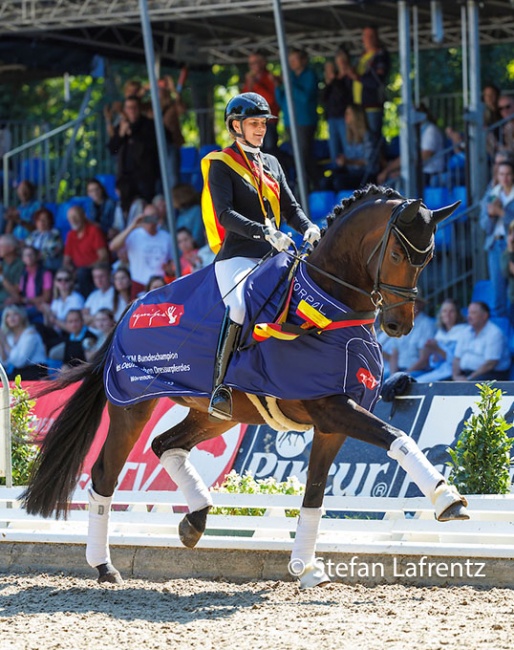 The 5-year old Final Dream, the 6-year old Atterupgaards Barcelo, and the 7-year old Dos Amigos became the winners of the Dressage Horse Finals in their respective age groups at the 2022 Bundeschampionate in Warendorf on 30 August - 4 September 2022.

The Bundeschampionate are Germany's annual young horse championships and held at the DOKR headquarters in Warendorf. Thousands of horses in the disciplines of dressage, show jumping and eventing gathered there to battle it out for the very important young horse titles.

The marketing value of the event is undeniable as the popularity of licensed breeding stallions rise as they score more points, and the sales price of horses sky rocket depending on the scores and ribbons they rake in at this show.

The monster class of the show is always the 5-year old division, which saw no less than 72 (!!) horses compete in the preliminary round. While the FEI has set 40 horses per day as a limit for one judge to assess, in Warendorf the judges are stretched to the end of their capability and need to score 72 horses in one class in one day.

The fifteen highest scoring horses in the preliminary round are eligible to move directly to the finals, the rest has a re-match in the consolation round, in which the horses with the three highest scores in the class - this year it were five horses who achieved those scores - also move to the Finals round.  Twenty-one horses therefore showed in the finals on Saturday 3 September 2022.

Judges Harry Lorenz, Klaus Storbeck and Ulrike Nivelle saw a winner in Anke Dieckell's Hanoverian gelding Final Dream (by Franziskus x Weltmeyer). Bred by Karin Storkamp and ridden by Kira Goerens-Ripphoff, the dark bay gelding scored a winning total of 9.2 points with an 8 for walk, a 10 for trot, 9.5 for canter, 9 for submission and 9.5 for general impression.   In the preliminary round, Final Dream had scored "only"  8.4 for a third place in group 1, but they definitely upped the ante in the Finals for the title, gold medal and champion sash.  The horse was praised for his outstanding hindleg that could easily engage and collect while staying balanced both in trot and canter. The walk did not have the most overtrack but was clear in the rhythm. Ripphoff has been riding Final Dream for 1.5 years and already placed fifth at the 2021 Bundeschampionate.

The silver medal in the 5-year old division went to Greta Heemsoth on Ingo Pape's Westfalian stallion Macchiato (by Morricone x Just Perfect). Bred by Grand Prix trainer Norbert van Laak, the dark bay stallion was 8th with 8.0 in the preliminary round and needed to qualify for the finals by going into the consolation, in which he landed fourth place with the third highest score of 8.3 points. In the Finals the judges envisaged a much bigger score for the horse and rewarded him with 9.1 in total. The stallion got 9 for walk and trot, 8.5 for canter, and 9.5 for submission and general impression.

Leonie Richter and Andreas Helgstrand's Oldenburg stallion Total McLaren (by Totilas x De Niro) tied in third place together with Ann Christin Wienkamp on Clemens von Merveldt's Oldenburg gelding Fuchtels Indigo (by Ibiza x Roadster). Both horses got a total of 8.8 points. The black Total McLaren, who is bred by Ralf Knauf, was rewarded with 8 for walk, and 9 for trot, canter, submission and general impression. The bay Indigo received 8 for trot and 9 for walk, canter, submission and general impression.

Fifty horses competed in the 6-year old division and sixteen of them made it to the finals. Three of those qualified through the consolation finals

Tessa Frank and Maik Kanitzky's Danish bred Oldenburg stallion Atterupgaards Barcelo (by Bon Coeur x Caprimond) went from fourth place in the preliminary round with 8.2 points to the title in the Finals on a score of 8.7. Judges Knut Danzberg, Elke Ebert and Cornelia Albrecht rewarded the stallion with 8.5 for walk and trot, 9 for canter, 8.5 for submission and 9 for general impression. Bred by Kristine Munch Sinding at Stutteri Atterupgaard in Denmark, Barcelo now carries the prefix of the owner's crane company Maxi Kraft, who bought the horse in February 2021. His dam Dicte is the full sister to Cathrine Dufour's Atterupgaards Cassidy.

Tessa Frank in fact had qualified two horses for the finals. She won the preliminary round on Jasmin Troike's Westfalian mare Danza del Sol (by DeLorean x Sandro Hit), but she injured herself in the box overnight and had to be withdrawn from the finals.

Last year's 5-year old champions, Greta Heemsoth and the Hanoverian mare Boa Vista FRH (by Bon Coeur x Scolari), got the silver this year with an 8.6 earning test. The chestnut mare, who is out of World Young Horse champion Scara Boa and bred and owned by Ingo Pape, received 8 for walk, 9.5 for trot, 8.5 for canter, 8 for submission and 9 for general impression.  The breeding stallion Bon Coeur (by Benetton Dream x Sandro Hit) certainly made his mark with two of his offspring winning gold and silver. Bon Coeur is owned by Swedish Antonia Ax:son Johnson, who sponsors Olympian Tinne Vilhelmson.

German Young Riders' team member Lucie-Anouk Baumgurtel scored the bronze medal aboard the Hanoverian mare First Vienna (by Vitalis x First Dance x Weltruhm) with a total score of 8.5 points. Bred by Beekenhof Gmbh and previously owned by Christine Arns-Krogman before the Baumgurtels bought her, the bay mare received 8.5 for walk, canter and submission and 9 for trot and general impression. She was previously shown by Vanessa Crnadak.

The 2022 Bundeschampionate celebrated a premier as it was the first time that the 7-year olds had a championship of their own in Germany.  With the existence of Nurnberger Burgpokal for Developing Prix St Georges horses aged 7 to 9 in Germany, there was little need to also have a 7-year old Championship at the Bundeschampionate.  However, as the Nurnberger Burgpokal is more restrictive in the amount of horses that are allowed to compete in the classes and qualify for the finals, a gap was being filled by instating a 7-year old category in Warendorf.

The inaugural champion was Dos Amigos OLD, an Oldenburg gelding by Dimaggio x Sir Donnerhall, bred by Constanze Furste and owned by the rider, Leonie Richter. The pair made a statement in the qualifier round by being the high scorer of the class and they continued on that strong form in the Finals test in which they posted a gold medal earning 80.948%. Richter discovered Dos Amigos as a 4-year old at the breeder's and only lighted competed him in the past few years.

Stefanie Wittmann and the Hanoverian stallion Famous K (by Finest x Londonderry) were closely on Richter's heels and scored silver with a 79.871% earning test. Her stallion is bred by Martina Knetsch and owned by German pony rider Lilly Marie Collin, who purchased the stallion in August 2021. Last year Famous K achieved the bronze medal at the Bundeschampionate under Leonie Richter.

The bronze medal was snatched by German based Spanish Grand Prix rider Borja Carrascosa, who competed two horses in the 7-year old Finals and placed third and fourth with them. The bronze was for his 78.846% earning ride on Möhlmann & Von Fintel's Hanoverian stallion Fun4Ever (by Feedback x De Vito). The dark bay is bred by Gerd Pigge and was previously shown by Felix Hilmer.  Carrascosa landed fourth place on his owned Hanoverian stallion Frizzantino (by Finest Quaterback) who got 78.615%. Frizzantino will get little time to rest as he needs to be at the trot-up for the World Young Horse Championships in Ermelo on Wednesday.