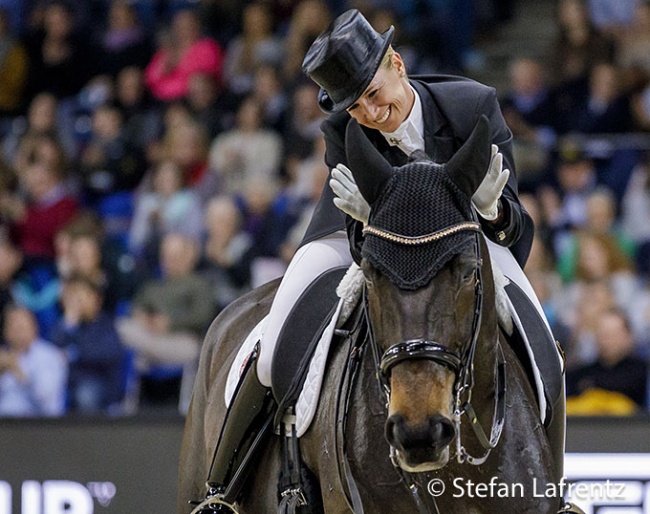 Olympic and European Champion Jessica von Bredow-Werndl is forced to postpone her come back to the show arena. The FEI finds her not eligible to compete at the 2022 CDI Ludwigsburg next week.

Werndl broke the news herself on her social media and wrote the following:

"I was really looking forward to my comeback in Ludwigsburg after the baby break, but my participation was not approved. The FEI denied me the permission to start based on their maternity leave regulations.

"During my pregnancy I applied for maternity leave from the FEI, which means that 50 percent of my (World) ranking points will remain for the period of my maternity leave. According to the interpretation of the FEI, I am also not allowed to compete in shows in this maternity period. I have consulted with the FN and we do not share the FEI's view. Our interpretation of the rule is that when athletes apply for maternity leave, the FEI must grant at least six months. However, it is not regulated that an athlete MUST also take a six-month break. The athletes should also be allowed to end their maternity leave earlier. The month in which one starts again for the first time, means the ending of the existing points from the accrual period."

Werndl continued, "I know the regulations and would have accepted losing the corresponding ranking list points if I had started in Ludwigsburg. I think it's simply unfair not to be able to start at all now and I can't understand the decision given the wording of the FEI regulations.
It says: "If the maternity/medical leave lasts less than six (6) months, no points will be retained from the corresponding month of the preceding year."
So I assumed that I could start again by deliberately not counting the world ranking points."

"So, unfortunately, I have to withdraw my participation (also nationally) and I am very sad not to be able to bring my horses to the start. I wish for the future (for my colleagues) that the regulations will be adjusted."

The FEI Dressage World Ranking list is based on:

• Percentages, scored in international competitions under FEI rules.
• Each Grand Prix level result will count from each international CDI3/CDI4/CDI5*/CDI-W event. Consolation Grand Prix results (which have to be clearly marked in the schedule and result lists) will not be taken into account.
• Three results per event will count from CDIOs, Olympic Games and World and Continental Championship.

The FEI Maternity Leave Rule, effective as of 1 January 2019, reads as following:

Athletes may request a maternity leave or a medical leave providing the pregnancy/medical condition is certified in writing by a medical doctor; requests for maternity/medical leave must be addressed to the FEI Dressage Director. During the period which an Athlete has officially ceased to compete due to pregnancy or a medical condition, he/she will retain 50% of the Dressage World Rankings points earned from the corresponding month of the preceding year until he/she recommences competing internationally.

The maximum length of time an Athlete may benefit from a maternity/medical leave of absence at one time is twelve months. During the period in which an Athlete is on maternity/medical leave, he/she may not compete in international or national Competitions; the FEI will inform the Athlete’s NF accordingly. The Athlete concerned must inform the FEI Dressage Director when he/she resumes international participation.