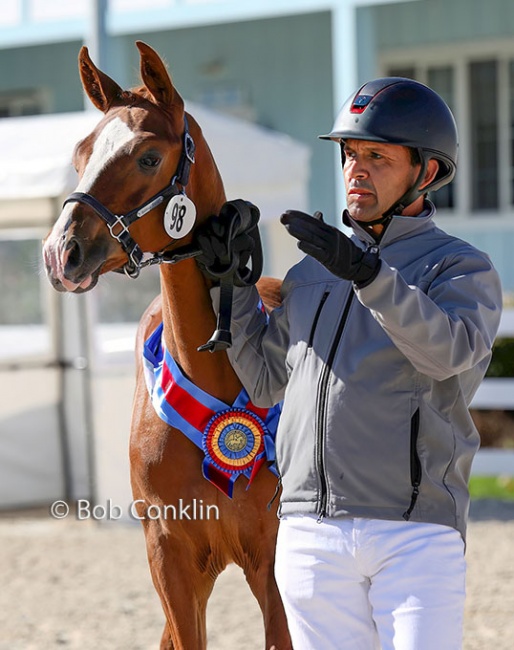 On the opening day of the Devon Breed Show during the Dressage at Devon CDI international competition week, the colt Fahrenheit Hilltop claimed the title in the Foal Championship.

The Breed Show takes place over three days and began on Tuesday 27 September 2022 with the youngest taking centre stage, the foals.

In the Wheeler Ring’s first awards ceremony of the day, the Foal Championship went to Fahrenheit Hilltop, a chestnut Hanoverian colt by Blue Hors Farrell out of Raureif (by Ramiro's Bube), bred by Sally Fish and owned by Hilltop Farm. Presented by Michael Bragdell, this colt was presented with the Sally Martin Memorial Perpetual Trophy along with his new champion ribbon.

Four foals competed for the Champion's title and the reserve champion was Iron Callista TR, a black Hanoverian filly by Iron out of Comic Callista (by Comic Hilltop). She is bred, owned and presented by Robin Birk of Timber Ridge Equestrian centre from Ruffs Dale, PA.

Third place went to Southern Belle MP, a bay KWPN filly by Vilancio out of Darling ISF (by Sir Sinclair). She is bred by MP Sporthorses and owned by Melanie Harper.

Foals of the Current Year

Fahrenheit Hilltop began his conquest at Devon by winning the colt/geldings of the current year class. The judges rewarded him with 98.5 for frame, and head/neck/shouler, and they gave him 9s for back, croup, legs, and feet. For walk he got 8, for trot a 10. The general impression score was 9.5, which made his overall total 91.250%.

The Westfalian bred pony colt GWS Chicago (by Censational x Popeye) was second in the colt category with a total score of 79.600%. He got 8.5 for frame, head/neck, shoulder, 9 for back/loin/croup, 8 for his legs and feet, 7.5 for walk, 7.8 for trot and 8.2 for general impression.

In the fillies of the current year class, Melanie Harper received highest honour with the KWPN registered Southern Belle MP (by Vilancio x Sir Sinclair) who totalled 82.90%. This filly got straight 8s for her general conformation and walk, and 8.8 for trot and 8.5 for general impression. Robin Birk's Iron Callista TR (by Iron x Comic Hilltop) was second in this division with a score of 79.050%. This filly got 8 for frame and topline, 9 for neck and shoulder, 8 for back, loin, and croup, 7.8 for legs and feet, 8 for walk, 7.8 for trot and general impression.

For the fourth time at the Devon Breed Show pony breeding classes were included in the programme.

In the Pony Foal/Yearling Championship GWS Chicago, owned and shown by Amy Brumbach and bred by Angela Mirarchi, moved into the winner's circle for the champion sash.

Phable of Rapunzel, a yearling filly (by Phenix out of Rapunzel (by Rambo));, owned and shown by Keri Blizniak and also bred by Angela Mirarchi, took home the red ribbon, while Fox Hills Knight’s Tale, a Hanoverian yearling colt by Pixar out of WPF Special Edition (by Woodberry's Hot Topic) owned, shown, and bred by Brigitte Deitz, finished in third place.