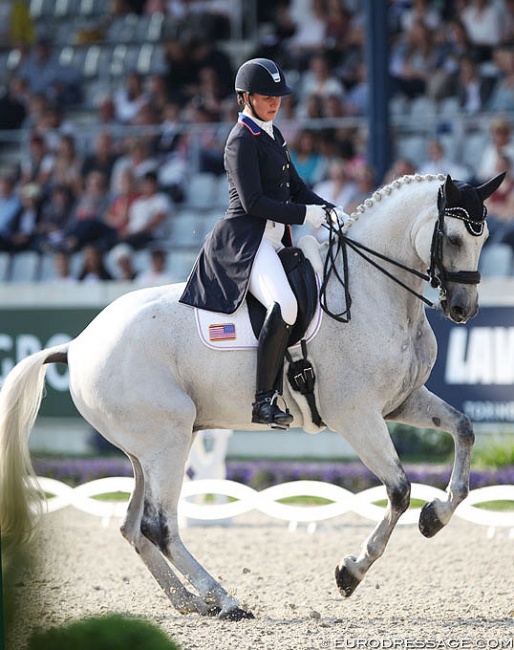 Harmony's Duval is a 14-year old American bred KWPN gelding by Rousseau out of Uptown Girl (by Riverman). He is bred by Leslie Malone of Harmony Sport Horses.

The grey gelding was trained and competed at Grand Prix level by Adrienne Lyle.

In the USDF database, Duval was listed as owned by Robert McDonald when Lyle first competed him once as a youngster in 2013.  The pair returned to the arena in 2016 and then the horse was owned by Kylee Lourie, before the ownership switched in 2017 to  Duval Partners LLC, a group of Northwest United States dressage supporters.

Adrienne Lyle made her international show debut on the gelding in 2017 at small tour level, competing him in Wellington that winter, followed by achieving a bronze medal at the 2017 U.S. Small Tour Championship.

In 2018 they did not show at CDI's but in 2019 they made their international Grand Prix debut, also in Wellington and competed in Europe in Leudelange and Aachen that summer.

Duval was always Lyle's back-up horse to her Olympic team ride Salvino and the gelding consistently produced scores in the low seventies. In 2020 and 2021 they showed only in Wellington. He did not compete internationally in 2022

The ride on Duval has now allocated to Adrienne Lyle's student, Christian Simonson.

The 20-year old, originally from California, first came into the spotlight as a junior rider competing the Hanoverian Herzkonig (by His Highness x Weltmeyer) in 2016. He drew much attention when his family acquired the Hanoverian Rassolini, a former Nurnberger Burgpokal winner, as a schoolmaster from Jan Ebeling. He competed the liver chestnut at the 2018 North American Young Riders Championships, but their partnership ended with mixed results and the horse was retired from sport at age 16 in 2019.

Simonson's big break arrived with the coming of new horse, Danish warmblood Zeaball Diawind (by Furstenball x Zardin Firfod). This lovely horse took him to the 2021 North American Young Riders Champion's title, U.S. Young Rider's Champion's title and Europe and they competed at the CDIO-Y Hagen. Zeaball got a break from competition after his last start in Wellington in March 2022. The young professional added a new horse to his string in spring, Son of a Lady (by Soreldo x Welt Hit II), and took him to the CDIO-Y Aachen.

To open the door to Under 25 Grand Prix level, Simonson has now been given the opportunity to compete Harmony's Duval.