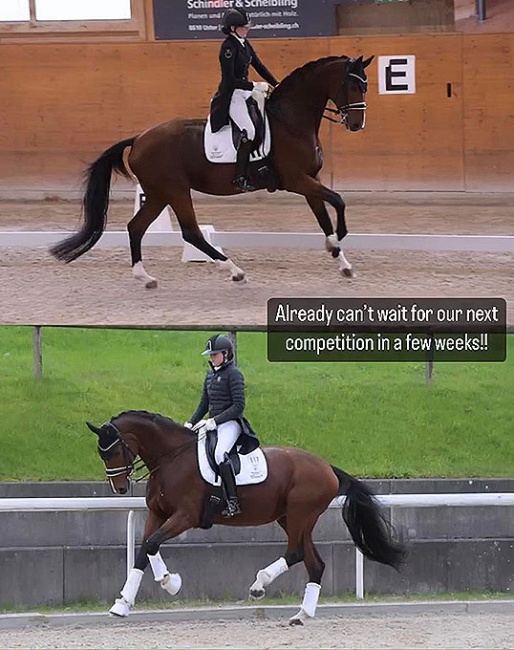 With her last year as a junior rider approaching in 2023, Swiss team rider Robynne Graf can look forward to the new season with three irons in the fire. Graf has received the ride on Sandra Meier's Seventh Sky.

Seventh Sky is a 14-year old Oldenburg mare by Sir Donnerhall out of Golden Truth (by Donnerschwee x Goldstern). She is bred by Bernhard Huslage.

Originally named Solid Gold, the mare was first competed in Germany as a youngster by Lena Rössel.

The mare sold to Sandra Meier in Switzerland and was trained and competed up to FEI level. In 2019 Meier showed her in her first Intermediaire II tests and by 2020 they were showing at Grand Prix level.

The 17-year old Robynne Graf, whose parents are professional dressage riders Markus and Simone Graf with a training facility "Stall Mainau" in Dielsdorf, Switzerland, has now taken over the ride on Seventh Sky as her partner towards to Young Riders level.

Graf's international career began on ponies in 2018 with Dallas (by Dressman), whom she competed at the 2019 and 2020 European Pony Championships. In 2021 she moved to junior level with Domino (by Don Frederico x Weltmeyer) and Der Kleine Hit (by Diamond Hit x Alabaster). She rode the former at the 2022 European Junior Riders Championships in Hartpury.

"I took over the reins of Seventh Sky, who is still owned by Sandra Meier," Robynne told Eurodressage. "I will be riding her in the young rider class, but my focus is still on juniors with Domino and "der kleine Hit" of course. I’m super thankful for the experience. Also that I can ride juniors and young riders at the same time."