Look Who's Back: Sezuan - Returns after Five Year Break from Competition 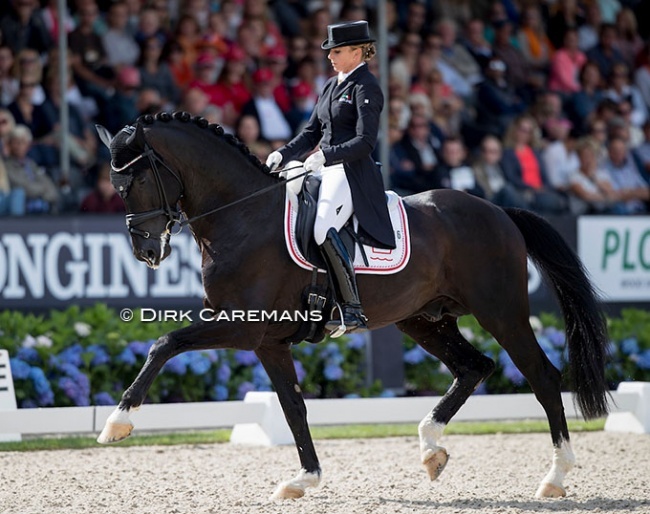 After a 5-year break from competition, the elite Danish warmblood horse Sezuan has returned to competition under a new rider, Luxembourg's Sascha Schulz.

The new duo made its show debut at a small local show at the Zweibrucken state stud in Zweibrucken, hosted by the riding club Bliesgau on Saturday 19 November 2022, where they scored 70.702% to win the Prix St Georges in a field of 22 combinations. They were not entered for the Intermediaire I on Sunday.

Sezuan is by Blue Hors Zack out of Bøgegårdens Don Romina (by Blue Hors Don Schufro) and bred by Linette Jaeger.

Under Helstrand Sezuan won the Danish Young Horse Championships for 4-year olds after which he sold to German Arlette Jasper-Kohl. The stallion moved in training with Dorothee Schneider and became the triple Young Horse World Champion.

Schneider decided to end her collaboration with Jasper-Kohl and Sezuan disappeared from the show scene, his last start being the CDI Darmstadt in September 2017 under Dorothee.

The horse made one public appearance under Patrik Kittel in a show at the 2018 Danish warmblood licensing in Herning.

Absence from the Spotlight

For a long time it was announced that Kittel was preparing Sezuan for a Grand Prix show debut, but that never happened.

The horse returned home to owner Arlette Jasper to ride and enjoy.

In 2018 Sezuan only briefly stood at stud and as of 2019 no fresh semen was available.  He was gelded.

The Danish warmblood society proclaimed him elite in 2019 and named him Danish Stallion of the Year 2020. At the ceremony to honour Sezuan with this title in Herning, the horse was remarkably absent from his own celebration. Instead a video message was played, which was recorded at the end of February 2020 with Kittel riding the horse through some of the Grand Prix movements.

This video recording was the last footage made public of Sezuan

German born Luxembourg rider Sascha Schulz has been riding for Arlette Kohl's Gestut Peterhof in Perl, Germany, which is located right on the border with Luxembourg.

A while ago, Schulz left the business he ran with Luxembourg judge Christof Umbach out of Ecuries des Pres in Leudelange (LUX), where several CDI competitions were hosted.

Sascha's competition debut with Sezuan was nothing short of a pleasant surprise.