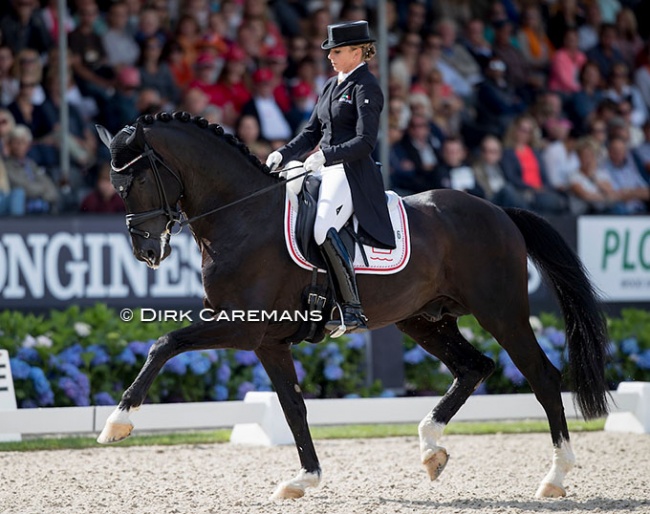 The rumours of Sezuan's castration were floating round on social media for quite some while, but emails sent to the owner or Peterhof press officer with questions about the horse's status remained unanswered. The German breeding magazine Zuchterforum now went public with the information.

Gelded for Owner to Ride

"Secretly and hush hush, Gestut Peterhof's 2009 born Danish stand-out stallion Sezuan has been gelded," Zuchterforum wrote. The magazine continued, "He was victorious up to Intermédiaire I and trained up to Grand Prix, although the switch to Patrik Kittel's training seemed to have not done him any good. The owner, Arlette Jasper-Kohl, then wanted to ride him herself. His masculinity probably got in the way."

Sezuan is by Blue Hors Zack out of Bøgegårdens Don Romina (by Blue Hors Don Schufro) and bred by Linette Jaeger.

Under Andreas Sezuan won the Danish Young Horse Championships for 4-year olds after which he sold to German Arlette Jasper-Kohl. The stallion moved in training with Dorothee Schneider and became the triple Young Horse World Champion.

Schneider decided to end her collaboration with Jasper-Kohl and Sezuan disappeared from the show scene, his last start being the CDI Darmstadt in September 2017 under Dorothee. The horse made one public appearance under Patrik Kittel in a show at the 2018 Danish warmblood licensing in Herning.

In 2018 Sezuan only briefly stood at stud and as of 2019 no fresh semen was available.

The Danish warmblood society proclaimed him elite in 2019 and named him Danish Stallion of the Year 2020. At the ceremony to honour Sezuan with this title in Herning, the horse was remarkably absent from his own celebration. Instead a video message was played, which was recorded at the end of February 2020 with Kittel riding the horse through some of the Grand Prix movements.

It was the last time Sezuan was "shown" in public.