The Essential Guide to the Piaffe - Part III: "With spring" in the FEI Rules 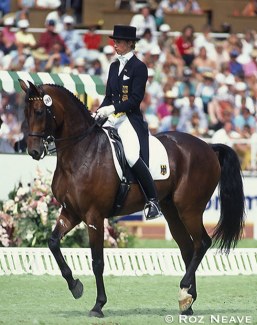 by Angelika Frömming for Eurodressage
This article is a continuation of Part I: The Piaffe is a Means to an End and Part II: Taking the Horse’s Individual Conformation into Account

"With spring" in the FEI Rules

In the FEI Dressage rules, there was nothing to be found on "with spring" as a hallmark of a good piaffe until the 1990s. In the "Special Provisions of FEI Dressage from 1958 to 1983," the piaffe referred to the moment of the suspension as following:

“Each diagonal pair of feet is raised and returned to the ground alternately, with an even rhythm (1983 cadence) and a slightly prolonged suspension.“

An additional negative factor in the assessment of a piaffe was added in 1983: “A movement with hurried and broken steps without cadence cannot be called a true piaffe.”

In the 1990s there was a publication by Hilary Clayton on the subject of "Short moment in suspension in the piaffe, yes or no?" As an example, Hilary Clayton had chosen the most successful horse in the world at the time, the World and Olympic champion Rembrandt. Using slow-motion studies, she was able to demonstrate that Rembrandt showed a moment of pronounced suspension. The problem was, however, that Rembrandt showed a perfectly rhythmic and meticulously precise piaffe in the required frequency, but with an only very slightly lowered croup. It was more like a passage on the spot than the piaffe, which should be seen as the preparation for a levad.

At the international judges seminar in Barcelona in 2000, clear statements were made regarding the moment of suspension: If the horse does not show any such moment, i.e. to change the diagonal, keeps both feet momentarily on the ground, or does not bounce or swing a little, but otherwise regularly, willing, relaxed, than a "pretty good" is possible. The judge was required to recognize whether or not the horse has a moment of suspension. In other words, a horse without suspension cannot get a mark over 7 for the piaffe.

Also in the Dressage Handbook, Guidelines for Judges, first edition 2006, it says: “Each diagonal pair of legs is raised and returned to the ground alternately, with spring and an even cadence”.

In a working paper for the Grand Prix Seminar in Kronberg in January 2011, the negative examples of "errors in the execution of the piaffe" included: "No cadence / phase of suspension possible, supporting at the front, bouncing at the back."

In contrast, in the "Guidelines for the Marking of Mistakes in Dressage Movements" (according to the FEI Dressage Handbook and following proposals of the 5* Judges´ Seminar 2017)  there was no requirement for "with spring" when listing the technical execution of the piaffe.

However, the FEI's dressage rules for 2019 set out the assessment criteria in detail and they emphasized the requirement "with spring and an even cadence."

The moment of suspension in the German rulebooks

The uncertainty as to whether or not there is a moment of suspension in the piaffe can also be seen in the rule changes in the guidelines for riding and driving and in the preamble to the LPO's program book.

Only in the 12th edition in 1997 it says: “The piaffe is a trot-like movement on the spot. The horse bends more and more in the haunches. (…) There is a short moment of suspension between the alternating of the respective diagonal pairs of legs.“

Since the 1997/98 and 2008 editions, the preamble to the LPO's program book also says: "There is a brief moment between the feet of each diagonal pair of legs in the suspension."

In 1877, Edward Muybridge used photography to prove that horses show a phase of suspension when they are cantering. Today there is no doubt about that. To be able to recognize this suspension phase, however, a certain amount of experience is required. In the same way as experience is necessary to detect problems in the walk pirouettes. Photos and slow-motion have also resulted in the fact that the clear three-beat is no longer required as part of a dressage test in the canter pirouette, but only that a canter stride has to be recognizable. In the meantime, thanks to electrical engineering, those interested in horses have learned to recognize movement sequences more realistically.

However, when we recognize the suspension phase in the piaffe, our eyes reach their limits. On the one hand our field of vision is around 210 °, but accurate vision is limited to a tiny part of the retina, to the eye pit. The further away from this fixed point, the less precisely we can recognize the object or the event. On the other hand, we see everything with interruptions. The investigations into the number of images that our eye can capture in one second are between 16 and 65 images. Just for comparison: insects see up to 300 images per second.

In addition, we have limited perceptual capacities when processing images: If you concentrate too much on one point - there is a suspension moment in the piaffe or not - the viewer is hardly able to perceive anything else on the horse.

When assessing the piaffe, a whole bundle of characteristics must be observed according to the rules. It should be important that these are clearly recognizable. One problem remains the question of the moment of “free suspension” or “with spring”.

In "ReitKultur, The Bookazin der Klassischen Reitweise, No.:4", Dr. Kathrin Kienapfel explained that there is demonstrably no such phase in a piaffe with lowered haunches.

Jytte Lemkow, international judge at the Olympic Games in Moscow 1980, writes in a letter to St. Georg / 2019 about the moment of suspension in the piaffe: "The slower (more collected) the trot is requested, the shorter the moment of free suspension, to almost disappear in passage and completely disappear in the piaffe. It corresponds to nature: the less speed, the more the horse has to support its body.”

Together with Marcus Schaarmann, head of the German Olympic Equestrian Center in Warendorf (DOKR) and responsible for professional training at the German Federation, I analyzed in 2019 numerous piaffe videos of successful horses that are no longer represented in sport. We particularly looked at the suspension moment in the piaffe. Attempts were made to find out first with the eyes and then with slow motion which horse shows how often a moment of suspension in a piaffe frequency of 12-15 steps. The slow motion brought it to light: Only two out of 10 renowned horses with high marks in the piaffes had actually one or two such moment during a single piaffe frequency in which the four legs were detached from the ground at the same time.

In the 1970s when I did my examinations to become amateur riding instructor at the classical Riding Institute of Egon von Neindorff in Karlsruhe, I asked him about the “suspension phase" and he replied this: Regardless of whether or not one recognizes a short, if only a fraction of a second of barely visible suspension between the feet of the pairs of legs, the rhythmic diagonal-simultaneous step sequence is generally recognized and an easily recognizable characteristic of the correct piaffe.

The soon to be published latest edition of the German Guidelines for Riding and Driving Volume II will therefore include an adapted definition for the execution of the piaffe: "there can be a minimal moment of suspension.“