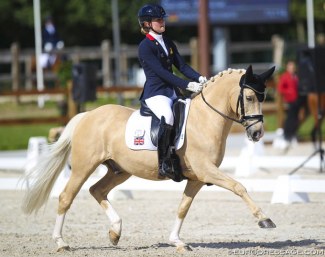 Cognac IX is a 13-year old German Riding Pony by FS Charmbertin out of Mosella (by Waldemar x Forsyth Sadat).

Presented by Peter Böge, he was licensed as a 3-year old at the Schleswig-Holsteiner Pony Stallion Licensing in 2011 in Neumunster

Sold the Tackmann family after the licensing, he was renamed Tachmann's Croissant WE.

The palomino made his show debut in Germany as a 3-year old under Wenke Kraus and won bronze at the 2011 Bundeschampionate in the 3-year old stallion class.

Kraus competed the pony in the riding pony tests through 2012.

In 2013 a gelded Cognac sold to Swiss horse dealer Otto Hofer and got the name Cognac IX. He was acquired for grand daughter Leonie Guerra, who did not compete the pony internationally.

In 2014 the Swiss based Greek Livanos family acquired the gelding for daughter Theodora.

Theodora Livanos has successfully shown Cognac IX at international shows in 2015 and 2016. She made her show debut at the 2015 CDI Caselle di Sommacampagna and competed him in Le Mans in the autumn of that year.

In 2016 they went full throttle, showing again in Caselle as well as Saumur, Compiegne, and Roosendaal before heading to the 2016 European Pony Championships in Vilhelmsborg as a Greek individual pair/ They performed very strongly and landed 14th place in the Kur to Music finals.

After the 2016 European Pony Championships, Cognac sold to Sarah Pigley in Great Britain as an FEI schoolmaster for Annabella Pidgley.

They showed at two European Pony Championships for Britain. At the 2019 Europeans in Strzegom (POL) they were 11th in the Kur Finals.

Pidgley and Cognac represented Great Britain as individuals at the 2020 European Pony Championships in Budapest, but the pony did not settle in well at the show grounds and was spooky. He ended 29th in the individual test.

As Annabella has reached the age limit and moved onto horses at junior riders level, Cognac was up for sale. He found a new home in The Netherlands with Yasmin Westerink.

This is the second FEI dressage pony schoolmaster that was sourced for 14-year old Westerink in Great Britain.

In September 2020, Yasmin acquired the British owned, former Dutch A-squad pony Brasil, with whom she made her international show debut one month later at the CDI Le Mans in October 2020.