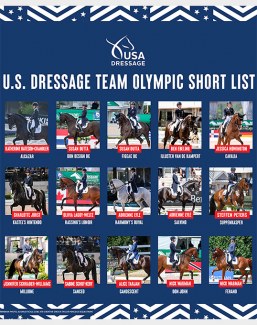 US Equestrian has announced the 12 athletes who have been selected to the U.S. Dressage Olympic Short List.

The total of 15 athlete/horse combinations are in consideration for the three team spots and the traveling reserve for the Tokyo 2020 Olympic Games this summer.

The following athletes and horses have been selected to the U.S. Dressage Team Olympic Short List and are listed in alphabetical order:

Ride Off at the Mandatory Observation Event

Instead of a European tour, US Equestrian has decided to host one single "mandatory observation event" where all short listed pairs will have a ride-off against each other to determine the team.

Athletes and horses will compete in the U.S. Dressage Short List Mandatory Observation Event at the Palm Beach International Equestrian Center in Wellington, Fla., from June 8-12.

The final team selection will be announced by June 21, 2021.  All nominations to the U.S. Olympic Team are subject to approval by the United States Olympic & Paralympic Committee.

At the moment the three highest scoring riders, who are considered to top team contenders are Steffen Peters (Suppenkasper), Adrienne Lyle (Salvino) and Sabine Schut-Kery (Sanceo).