Edward Gal and Total U.S. Take the Lead in the 2021 Dutch Dressage Championships 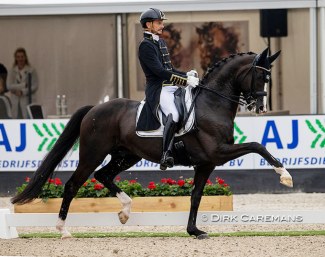 Edward Gal and Total U.S. have become the overnight leaders in the Grand Prix division at the 2021 Dutch Dressage Championships which are taking place behind closed doors at the KNHS headquarters in Ermelo, The Netherlands, on 4 - 6 June 2021.

On the same weekend as the 2021 German Championships, the Dutch Championships took place and served as first of two Olympic team qualifiers. The entire national A and B-squad is present to compete and battle for one of four spots for Tokyo.

Just like in Balve the scores were heavily inflated in Ermelo as is the tradition of national championships anywhere in the world. The all-Dutch judging panel (just like the all-German panel in Balve) just loves its own riders, horses and style, and assesses mistakes, lack of harmony and bridle contact less sceptically in a  20 x 60 arena on home turf.

Gal is One and Two

Newly frocked in a custom made tail coat, Edward Gal can arrive at any competition feeling safe that he will be generously rewarded for the phenomenal ground quality of his horses, no matter what is produced in the arena. Edward's new tailcoat was heavily discussed on social media yesterday and although its cavalry style might not be everyone's cup of tea, the fact that Gal changes things up and plays with fashion within the allowed boundaries of the FEI should be applauded ! Why not play a bit with the traditional dresscode?! We like it.

Not the more mature and settled Grand Prix horse Toto Jr (by Totilas x Desperados) but the younger and even bigger moving Total U.S (by Totilas x Sir Donnerhall) took highest honour in the Grand Prix Special with an enormous 81.128%. The judges' scores ranged from 79.468 (Wolfs) to 83.404 (De Bel).  Total U.S showed huge ground cover and scope in the trot extensions and half passes, always uphill oriented. The passage was not always evenly engaged with more right hind leg activity at times, but there was much suspension. The extended walk had massive overtrack but is not marching through the body and in the collected walk the young stallion was tense. The piaffes were on the forehand (but he scored a 10 for that). The stallion's immaturity at the highest level shows in his unsteadiness in the connection and head position throughout, and especially in his lack of self-carriage, most visible in the canter part. The horse moves in two pieces, often losing the 3-beat stride, and the flying changes are unbalanced. However in the pirouettes he reveals that the ability to collect is definitely there. The final halt could be more polished and square (8 - 9).

Gal placed second with Toto Jr. The black stallion made his 2021 CDI debut in Opglabbeek, Belgium, in May, where he was also beaten by stable mate Total U.S. even though the horse is more complete and settled at Grand Prix level. In Ermelo, the stallion gave his rider a handful, starting with a big booboo right before entering the arena, where the horse became unruly and Gal needed a few circles to get him back together. The live streaming strategically moved the camera away from what happened and just focused on the faces of the bystanders. The entry and halt still earned him 7.2. The first trot extension was too conservative, the others on the track much better, although the left one needed more overstep. The trot half passes were scopey and balanced, the first transition to passage was almost on the spot via piaffe. The passage was lovely with much airtime and regularity. Toto Jr has quite a chunky stallion neck and Gal did keep the nose out as best as possible, even though he rides the horse virtually on a blank curb. Sometimes the horse tilted to the right. The extended walk was outstanding with superb clarity in the 4-beat rhythm, it was the absolute highlight of the test (7.5 - 9). The collected walk, then again, was not collected at all but a medium walk (7 - 7.5). The piaffe work was not that good today with the horse not taking the weight behind but piaffing with the hocks up and out. The rhythm was good though. In the passage on the serpentines (and final centerline) he swung a bit in the body. In the tempi changes the horse got a bit sticky to the aids, not moving in front of the leg, which resulted in a lack of straightness (7.0). Gal regenerated the impulsion with good extended canter, the pirouettes were tiny and could use another stride. While the horse showed plenty of quality, there were numerous imperfections, the final passage on the centerline was a bit crooked, the piaffe at X had the hindlegs out.

Hans Peter Minderhoud and his number one choice for Tokyo, the KWPN stallion Dream Boy (by Vivaldi x Ferro) landed third place in the Special.

The pair executed big dynamic trot extensions, there was lots of crossing in half passes, which were regular and quick off the ground. Also in passage there was much forward thinking movement, although overall there could have been a bit more self carriage and collection in the trot-passage tour. The extended walk was lovely with good overtrack and relaxation. The first piaffe was wide in front but careful in the rhythm, the second was better in the rhythm but not really taking the weight from behind.  There was much ground cover in the canter half passes. He produced big two tempi's that needed to have more uphill tendency and straightness, and there was a counting error. In the ones all flying changes to the right were short behind. The pirouettes were small. The piaffe at X was the best one of the three shown.

The big rising star of The Netherlands this year is without a doubt Dinja van Liere. She made her international Grand Prix debut with two horses she has had in training since they were youngsters. Going against the current of what Dutch riders usually do - avoid all shows in Germany - Van Liere has competed horses at the CDI's in Hagen and Munich and received mid seventy scores in the lion's den. Coached by Dutch reining (!!) star Rieky Young-Burgmeijer, Van Liere is making a serious claim to a Dutch Olympic team spot, especially after the Special.

Her highest scoring horse is Trakehner cross bred stallion Hermes (by Easy Game x Flemmingh) but he did not produce his best test this season. Still there was plenty of quality there for them to finish fourth. The first trot extension was a bit flat and in the left trot half passes the hindquarters led. The passage was lovely, so lightfooted and effortless. In the extended trots on the track he could have been more engaged and balanced as he got a bit quick and hurried. The extended walk was very nice with a super V-moment in the rhythm and the collected walk was good. There was a bit of back-stepping in the first piaffe, but at least this horse is more correct in the movement as he lowers the haunches. The second piaffe was very nice, but the canter strike off tense. Hermes dropped a bit on the forehand in the canter half passes, but the two tempi changes were solid, the ones correct but can be bigger. The pirouettes were small. There was a small hesitation in the piaffe at X, but he made a lovely transition out into passage. Overall the horse needed to be more open in the throatlatch today. His nose stayed too much behind the vertical, despite a light contact.  They scored 75.851% with marks going from 73.617 to 76.702%.

Dinja's second horse, Haute Couture (by Connaisseur x Krack C) is equally talented to Hermes, but was a bit tense through the test. The passage is still a bit unbalanced (wide in front), but the mare has so much energy and willingness to go.  Haute Couture has the ability to drop the haunches and shows lots of electricity in the piaffe, but could have a better balance as she still swings behind. Overall the test looked a bit hectic and quick, but the mare was nice and soft in the bridle contact. Van Liere (with both her horses) are the ones to watch in Holland! They were sixth with 73.936%

Based on the results in the Grand Prix Special, Van Liere's biggest rival for that third Olympic team spot is Marlies van Baalen aboard her home bred KWPN gelding Go Legend (by Totilas x Ferro).

The black Go Legend is another impressive Grand Prix horse from Totilas' first crop of foals born in 2011. Van Baalen, who rode her first Olympics in 2004 in Athens on the KWPN stallion Idocus, has a definite team candidate in this horse, but their scores have not been as consistent as one hoped for in the lead-up to the Games. At the CDI Opglabbeek they had 73.087% in the GP, but dropped to 70.489% in the Special. At the CDI Exloo it was the other way round, starting with 69.717% in the Grand Prix but recovering to 74.319% in the Special.

At the Dutch Championships in Ermelo, the pair finished fifth with 75.064% (keep in mind this is a national show). The tall and strapping gelding did not start out with optimal regularity in the trot extensions nor half passes. The passage, however, was incredibly soft footed but sometimes the left hind leg engaged more.  The extended walk was clear in the rhythm but could have more marching with freedom in the shoulder. The collected walk was a bit tense but the piaffes were nice, although travelling forwards.  Van Baalen was doing quite a lot of half halting in front; the total picture would look even nicer if her hands remain more quiet and light in the contact.  The canter half passes were good, the tempi changes really nice and the extended canter well controlled.