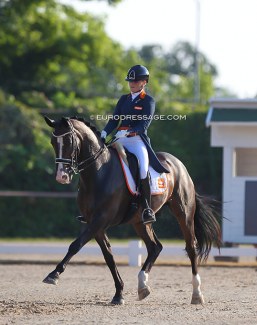 Fullspeed TC, the  team silver winning ride of Annemijn Boogaard at the 2019 European Junior Championships, has been sold to Germany. He will continue with Anna Stuhldreier.

Fullspeed is an 11-year old Dutch warmblood gelding by Ziesto out of Matrichta (by Contango x. Heidelberg). He is bred by Tim Coomans and was listed with the FEI as owned by Florine de Voogd and J. Klap.

Fullspeed arrived at Annemijn Boogaard's as a 4-year old in 2014. They first came into the picture at national junior level  in 2017.

The pair made its international show debut in April 2018 at the CDI Nieuw en St. Joosland, where they scored 69.040% in the team test. They rode at one more international that year in Waregem, where they finished third.

Their highlight year was 2019 with CDI starts in Joosland and Exloo. At the latter show they cracked the 70% barrier and at the 2019 Dutch Junior Riders Championship  they were fourth. This grabbed the attention of the selectors. They were nominated on the Dutch team for the 2019 European Junior Riders Championships in San Giovanni in Marignano, where they won team silver, placed fifth in the individual test (72.118%), but were eliminated in the freestyle.

In November of that year they moved to young riders level and rode at the CDI Aachen indoors. They did not show internationally in 2020, but rode the national team selection trial for the 2020 European Young Riders Championships.

They made a come back to the international arena in May 2021 in Exloo, where they posted 66.912% and 68.480% in the team and individual test. The pair was coached by Benjamin Maljaars.

Boogaard had planned on working towards Under 25 level, but the horse has now been sold to the Stuhldreier family in Germany.

He will become the junior ride for 15-year old Anna Stuhldreier, who made her international show debut on pony Tesio (by Timberland x Parino B) at the CDI Waregem last month