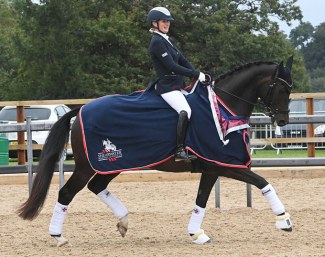 British Grand Prix rider Sadie Smith, Carl Hester's number one assistant rider; has traded in her job of five years at Hester's to cross the Channel and begin riding at Van Olst Horses in The Netherlands.

Sadie Smith is the unsung hero at Carl Hester's yard, the head assistant rider who does not get the press and publicity as does Charlotte Dujardin or trainer and employer Carl Hester. Smith succeeded Amy Woodhead, who decided in October 2016 to start her own business at her family's yard.

Sadie went straight from school to work with horses. She worked for Roland Tong, Bent St. John Hames, as well as rode freeland for annie McDonald Hall and Sarah Tyler Evans, before she was offered the job as head assistant rider at Carl Hester's Oakelbrook Mill stables in Newent, U.K.

Over the past five years Smith had gained invaluable knowledge and experience riding for Hester and mainly competing in Great Britain. Her international career is limited to two CDI starts, one at small tour level in 2018 and one at Grand Prix level in 2019 aboard Keystone Dynamite (by Dimaggio x Escudo). At national level she has most recently been showing Jaguar (by Lord Leatherdale x Negro) at Advanced Medium level and Swanmore Dantina (by Dante Weltino) in the young horse classes. They won the 2021 British Young Horse Championships for 6-year olds.

The time has now come for Smith to widen her horizon and start the next chapter in her career as a professional rider.

"Carl felt I needed more exposure to international training and more opportunities to ride," Smith told Eurodressage. "Obviously as Carl and Anne (van Olst) have been friends for many years he felt this was the next step. I have had an amazing 5 years here and am excited to see where next move takes me. I have a great deal of riding at Anne’s and to have her help is really something I look forward to."

Smith is the second rider in a short period of time that has joined Van Olst's team. New Zealand Grand Prix champion Melissa Galloway moved in at Van Olst a week ago.