IDRC Announces Plan for 2022: Increase the Voice of Riders in FEI Governance 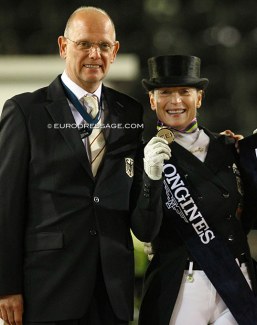 At the turn of the year the International Dressage Riders Club (IDRC), version 2.0, announced its short-term plans for 2022 and long-term vision to increase the voice of the riders in the governance of the FEI.

Eurodressage spoke with IDRC secretary-general Klaus Roeser about their vision for the future.

In December 2020 the International Dressage Riders Club injected new blood into its board by electing brand new members and give renewed energy and impetus to its mission.

In 2021 the Club announced its three biggest missions for 2021: push for a team of four for the 2024 Paris Olympics, make the top hat a free choice of the riders, and strive for clearer rules for the stewards, amongst many other topics.

A delegation went to the 2021 FEI General Assembly in Antwerp, Belgium, in November to lobby last-minute for rule revisions in favour of the riders' wishes as well as join hands with the International Jumping Riders Club (IJRC) in presenting a unified front.

For 2022, the IDRC has a bullet list of goals they wish to accomplish. Amongst them are:

"The one more day between the vet check and the Grand Prix is so everybody has time to get ready," Roeser told Eurodressage. "It will give the organizer more time to do the starting list for the Grand Prix as riders don't know if they start on the first or second day."

The IDRC wants to have clearer rules for the stewards and a more unified level of stewarding at all international competitions. The IDRC believes that at the moment the stewarding is strict at some shows and more lenient at others.

"We think it's a good idea to have a meeting between the riders and chief stewards before a show, so that there is better communication," Roeser stated.

Long-Term Targets for the Future

As long-term targets, the IDRC wants to restart the campaign to have teams of four at the 2028 Los Angeles Olympics and make a greater push for it by joining the jumpers and eventers as a unified stakeholders group.

The IDRC wants to be actively involved in the Code of Points and development of the FEI Video Handbook for judges.

The IDRC wants to have a say in the election process of the rider representative for the FEI Technical Dressage Committee, as well as for the FEI board. These are two separate positions. The Athlete representative on the FEI Board holds a more powerful position as a Technical Committee member can only make recommendations or proposals, whereas the Board decides and executes. At the moment the FEI Board appoints the Athlete representative itself and the riders or Clubs (IDRC/IJRC) have no say in it.

"This has to be an open election, so it motivates riders to vote," said Roeser. "The IDRC wants to be able to submit their person, or let the IDRC at least make a recommendation.  The show organizers and the riders are the ones deciding the sport and they are not well represented in the FEI Board. The riders have just one voice out of six (Board members), there is no direct influence."

For Roeser this is a critical issue as this year riders across disciplines felt that they were not heard by the FEI.

"Riders lose their interest to get involved or be engaged," said Roeser. "They are frustrated as their voice is not heard by the FEI. We need a discussion with the stakeholders on how we can change the way of decision making."

The voting system within the FEI has to be changed to a "weighted voting system" instead of "one nation - one vote".  The IDRC believes that the bigger horse nations with active members competing internationally should have a stronger say in the governance of the sport. Around 20 of the FEI’s 136 existing member countries have no registered riders or horses at all, yet their vote counts as much as that of powerful horse nations such as Germany, The Netherlands, Great Britain or the U.S.A.

At the 2021 FEI General Assembly, national federations voted in favour by 70-30 of a team of three riders and no drop score for the 2024 Paris Olympics. Less than 10% of the 70 countries in favour of the three-rider format had ever competed in the Olympics or had any riders competing in Nations Cups or 5* shows!  Another solution instead of the weighted voting system is an associate tier of FEI membership for national federations, so that developing horse countries first produce the riders and horses for international sport, before they have a vote in the governance of the sport.

"We need to get the riders out of their sofa and open their eyes to the problems," Roeser concluded.