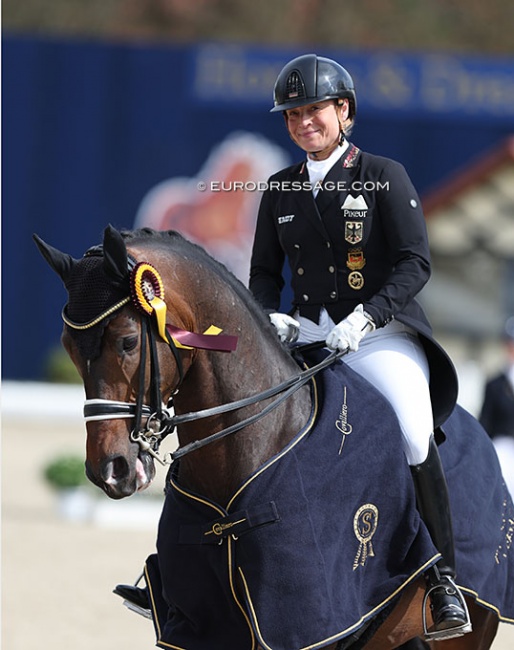 Isabell Werth and the 12-year old DSP stallion Quantaz showed that they have gelled more over the winter and won the 4* Grand Prix for Special at the 2022 CDI Hagen on Thursday 21 April 2022.

In a class of 24 combinations from 15 (!) different countries, Werth ruled roost on Victoria Max-Theurer's stallion by Quaterback x Hohenstein on a score of 77.957%. The ground jury of Cesar Torrente, Hans-Christian Matthiesen, Katrina Wüst, Henning Lehrmann, and Raphaël Saleh was slightly divided on the scoring though, with three of five judges ranking Werth first and her individual marks going from 75.761% all the way up to 79.565%.

Quantaz showed improvement in the contact and was more consistent in the frame, but the test had several imperfections that made an almost 80% score highly improbably. There was loss of rhythm in the right half pass as well as in the third extended trot, the rein back was not square and both the walk and trot extensions could have had more overtrack. The second piaffe-passage had good rhythm though, but overall Quantaz gets high in the croup and hollows the back. There was a mistake in the one tempi changes, but the two's were faultfree. The zig zag was correct and the pirouettes small.

Swedish Juliette Ramel and her routinier, 16-year old KWPN gelding Buriel KH (by Osmium x Krack C), were the runners-up with 76.261%. While the trot extensions lacked elasticity, the half passes were good. The first piaffe was slightly forward, and there was little overstep in the extended walk, but the canter had lots of yummy bits with straight tempi changes and sitting pirouettes. The canter strike off from passage was not as polished.

Benjamin Werndl and Flora Keller's 13-year old Oldenburg gelding Famoso (by Farewell III x Welt Hit II) landed third place with 76.065%. The bay gelding regularly ground his teeth even though the contact was light in the test. While the ground cover in the trot half passes was rathed limited and the second trot extension barely ridden, the piaffe and passage work was wonderful.

Three Swedes covered three top five places. Therese Nilshagen and Lodbergen's 15-year old Dante Weltino (by Danone x Welt Hit II) placed fourth with 75.652%. The black stallion could have been a bit more steady in the connection and head, but the test was a pleasure to watch, as always: soft, supple; elegant. The half passes and extended canter were highlights, the one tempi changes uphill but laboured.

Patrik Kittel and Sommarkvarn's Swedish gelding Touchdown (by Quaterback x Sack) completed the top five with a 75.609% earning test. The 10-year old bay stallion is still young at Grand Prix level with the passage lacking self carriage and legs flinging in the trot extensions, but there was tons of shoulder freedom in the trot half passes and the one tempi changes were straight. Touchdown breathed heavily throughout the test and came a bit behind the vertical in the zig zag, but the horse has plenty of quality for the Grand Prix work and it will be exciting to see his development in the future.