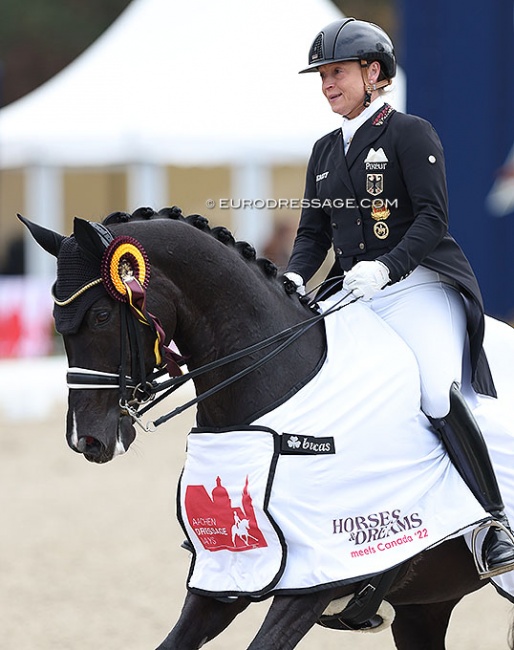 The 2022 CDI Hagen - Horses & Dreams Meets Canada - competition at Hof Kasselmann was action packed with no less than three big tour divisions. Hosted on 20 - 24 April 2022, the CDI Hagen featured a 3* tour as well as two 4* divisions.

In the international 3* tour German Isabell Werth presented her next generation Grand Prix horse Superb, who will fill the shoes of Isabell's recently retired top horses Bella Rose and Weihegold. Superb and the more experienced Quantaz are now lined up as team potentials for the 2022 World Championships Dressage while her third ride, Emilio, stands in the wings, not having competed in almost a year (last show CDI Achleiten in June 2021).

In Hagen Madeleine Winter-Schulze's 10-year old Hanoverian mare Superb (by Surprice x Donautanz) won the big 3* Grand Prix class on Wednesday and returned to the arena the next day for the Special, which she also won with 75.404%.

Eurodressage saw the special and witnessed how talented the black mare was, but still very green at Grand Prix. It was a bit of a workout for Isabell to pilot the long legged and long-backed mare through the test. The trot extensions were very ground covering, but the half passes unbalanced. In passage the mare could engage more from behind and move the hindlegs towards the point of gravity. The horse's inexperience can also be seen in the piaffe, in which she still leans on the forehand and just bops up and down with the hindquarter; work in progress. The mare relied much on her rider's steering and was often leaning in the contact. Still, all the ingredients were certainly there for a great future, but it all looked quite unpolished and laboured that day.

The 75% end score seemed very much name/reputation driven as the judges differed in assessment and their marks went from 73.83% to 76.277%.

A similar judges' discrepancy happened on Saturday when Werth presented her rising small tour horse Joshua (by Sezuan) in the Nurnberger Burgpokal qualifier. The mega talented black gelding is for sure a future super star, but did not settle in the test in Hagen and there were several mistakes and the horse was tense. Judge Hans-Christian Matthiesen scored what happened (68.293%), Plewa was on the fence (70.854%) and the other three German judges were on another planet (Schmidt, Von Platen, Nockemann) with their 75.00%, 77.439% and 73.415%. A detailed description of what happened in that test on St. Georg. In the actual Nurnberger qualifier test the pair retired at the end of the test.

Back to the 3* Grand Prix Special!

A totally different picture was painted by Finnish Emma Kanerva and Ger Saborowki's 10-year old Oldenburg gelding Mist of Titanium, who was steady and soft in the contact throughout the test and extremely harmonious with his rider. In canter the horse was still unbalanced and swung in the tempi changes. There was a mistake in the ones on the centerline.

Korean Young Shik Hwang and his 10-year old Hanoverian Bluebarry Dream (by Benetton Dream x Wolkenstein II) were quite the surprise pair with very good riding. The chestnut showed good trot lengthenings, consistent passage work and good tempi changes, particularly the ones. They were third with 73.128%