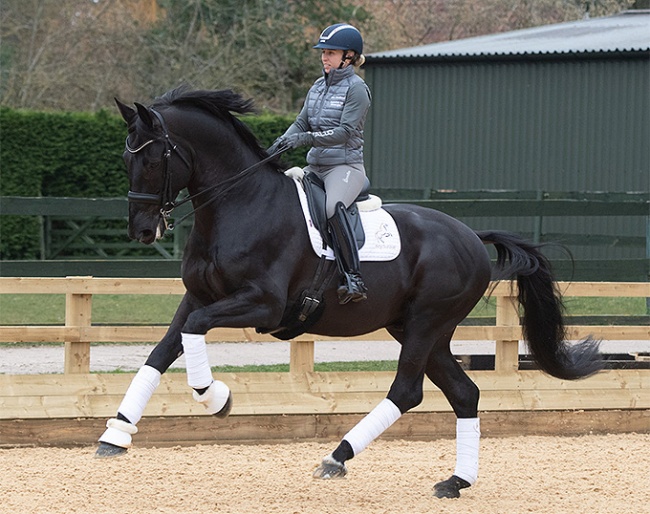 The British bred breeding stallion and aspiring Grand Prix horse U-Genius has passed away on 5 June 2022 following a colic attack.

U-Genius was an 11-year old AES registered stallion by Uthopia out of Valegro's full sister Weidyfleur II (by Negro x Gershwin). He was bred by Claire Hester and originally named Euphoria.

Bred, Reared and Trained in Britain

U-Genius was born in 2011 when both sire Uthopia and Weidyfleur's full brother Valegro were the major break-through stars in Great Britain that went on to win Olympic gold in the London Games the next year.

The black stallion received much publicity and gained popularity as a breeding stallion in the U.K., but it was a long wait for him to make his debut as an international dressage horse.

Owned by breeder Claire Hester in partnership with Roly Luard, Anne Seifert-Cohn and Carl Hester, U-Genius was trained up the levels at Carl's yard and exclusively competed in Great Britain.

The stallion made his show debut as a 5-year old under Hester's assistant rider Amy Woodhead in 2016. He was very lightly competed with one start in 2017, a two-year break followed after which he returned at Advanced Medium level in the spring of 2019. He placed 6th at that level at the 2020 British Winter Championships and moved to small tour level in the autumn of 2020.

In 2021 he did one national show at Vale View in April and a month later made his international show debut at small tour level at the 2021 CDI Wellington Heckfield, where he scored 68.43% in the Prix St Georges (12th) and 66.77% in the Intermediaire I (18th). It was the horse's last show in his career.

U-Genius untimely passed after he was struck by a bout of colic.

"After showing mild signs of discomfort and colic and not responding to initial veterinary treatment he was, as a precautionary measure, taken to equine hospital," Claire Hester explained. "His condition declined and the tough decision was taken to operate. Very quickly the surgeons realised they couldn’t save him, and he was quietly put to sleep without any suffering."

Claire added, "it feels so unfair for him and us, that after being so careful with his clear talent and preference for Grand Prix he will never get the chance to show everyone how truly magnificent he had become. After years of sympathetic training and preparation he was now ready to step onto the world-stage, and for this to be taken away at the final hour feels so unjust."