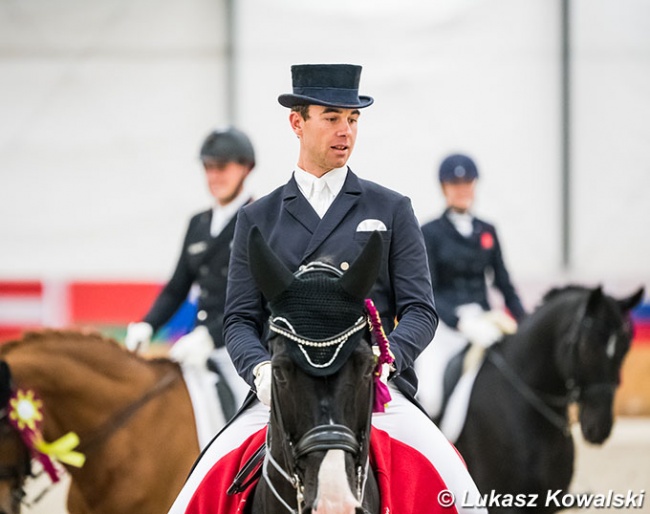 In a respectable field of 16 competitors with riders mainly from central and East Europe, the German A-squad listed rider made a clean sweep in the big tour division. Only fellow German A-squad rider, Frederic Wandres, was able to give Werndl a run for his money whereas the rest of the pack followed in their wake.

Werndl and Flora Keller's 16-year old Westfalian gelding Daily Mirror (by Damon Hill x Florestan) won the warm-up Grand Prix with 76.761% and topped the board in the Kur to Music with 82.475%, just five weeks after Werndl fractured his collar bone at the German Dressage Championships.

Wandres and Hof Kasselmann's 13-year old Hanoverian gelding Duke of Britain (by Dimaggio x Rubinstein) were second in the Grand Prix with 75.174% and second in the freestyle on 80.7575%.

In the Grand Prix, Belarus Olga Safronova and the 12-year old Oldenburg bred Sandro D'Amour (by San Amour x Rubinstein) were third on 70.522% but they dropped down to an 8th place in the freestyle with 71.300%. German Carina Scholz and the 13-year old Hanoverian Tarantino (by Toronto x Carbid) were 5th in the Grand Prix on 6.065%, and surged to a third place in the freestyle with 77.250%.

In the Kur the Russian duo Maria Klementieva and Regina Isachkina completed the top five. Klementieve and her American bred 12-year old Hanoverian Doctor Wendell MF (by Don Principe x Sandro Hit) were fourth on a personal best score of 75.900%, while Isachkina and her 11-year old Rhinelander stallion Sun of May Life (by San Amour x Rubioso N) slotted in fifth with 74.275%.

Isachkina is currently standing in the lead of the 2020-2021 Central European League World Cup ranking with 35 points, achieved at the CDI-W's in Minsk, Fot and Zakrzow.

Following her in second place at the moment is Hungarian Csaba Szokola on his own and Julia Nagyhazi's 12-year old Hungarian, show jumping bred Enying (by Balou de Rouet x Acorn) with 28 points. He competed at the CDI-W's in Brno, Fot and Zakrow.

The 2020 CDI-W Zakrzow posted an action packed programme with classes from pony to Grand Prix level.

They opted not to ride the Kur and paved the wat for Lithuanian Sandra Sysojeva to win the freestyle on her 12-year old Westfalian gelding Furst (by Florenciano x Furst Piccolo) with 75.535%.