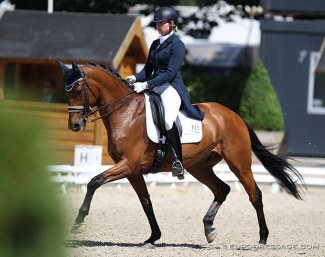 Chocolate Cookie RDP is a 13-year old Dutch warmblood gelding by Johnson out of Noblesse (by Livingstone x Naturel). He is bred and was owned by Karin Retera.

Horses.nl reported that Poelman purchased the bay gelding to make her dream come through. "I think that for many riders the Grand Prix is the ultimate goal and that is also for me," she told Horses.nl.

Chocolate Cookie RDP was previously trained and competed by Jenny Schreven and NIikki Schaap. She rode him at three internationals at Grand Prix level, the 2017 CDI's in Roosendaal and Waregem and the 2018 CDI Leudelange.

This year Dutch Under 25 rider Dana van Lierop took over the ride on Chocolate Cookie RDP and was able to ride him in the picture. They were selected as Dutch team reserves for the 2020 European Under 25 Championships, but the owner pulled the horse away right before the Championship to sell it.

The 19-year old Poelman began her international dressage career on ponies in 2016. She competed Haasendonck's Sultan at FEI pony level that year at shows in Drachten, Joosland and Roosendaal. Three years later she returned to the CDI ring as a junior aboard Enouska (by Tuschinski x Havidoff) and Zamora (by Welt Hit II x Vasco) at the CDI Sint-Truiden. She rode one more international that year in Leudelange, Luxembourg in July 2019.