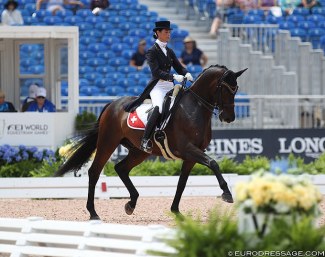 The Swiss Equestrian Federation has announced the dressage squad leading up to the new year and 2021 show season.

The Swiss NF has set as goal to field riders in all three Olympic disciplines at the 2021 postponed Olympics in Tokyo.

Switzerland obtained one individual dressage spot for the 2021 Games. Swiss rider Birgit Wientzek-Pläge unlocked that slot for Switzerland on Theodora Livanos' Robinvale, but the actual rider that gets to go will be decided in the early summer of 2021. In 2021 there will also be European Dressage Championships in Hagen.

"The selections for the Olympics will be early next summer and of course we are aiming to send a team to the Europeans as some pairs will be able to get international experience until the autumn," said Evelyne Niklaus, the dresage chief at the Swiss NF.

New selection criteria were adopted to draft the 2021 Swiss dressage squads. In particular the perspective squad (small tour level with promise for Grand Prix) has been expanded.

The 2021 Swiss Squads include