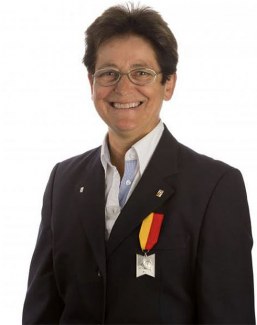 For the eighth time, the BOIC awarded its Order of Merit to a person who has made an exceptional contribution to the Olympic Movement in our country. This year Ann D'Ieteren is the recipient.

Anne van Neste-D'Ieteren was selected to represent Belgium at the 1980 Olympic Games in Moscow, but one month before the Games the Belgian Equestrian Federation joined other nations in boycotting the Moscow Games. She was also short listed for the 1984 Olympics in Los Angeles. Aboard Juroto she was six-time Belgian Dressage Champion.

D'Ieteren has been involved in equestrian sport for 42 years. Since 2009, she has chaired the Belgian Paralympic Committee and been committed to sports for people with disabilities.

She served as Belgian team trainer rom 1997 to 2015, and led the para dressage team to numerous high level international achievements, including 6 Paralympic medals (including 3 gold) at the London 2012 and Rio 2016 Paralympic Games.

"With her unparalleled expertise and dedication, she has helped shape the Olympic and Paralympic Movements," the press release read.