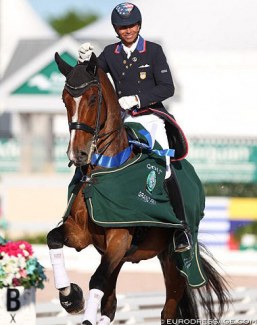 His median score of 76.149 percent made him the top horse in the United States competing at this level and the recipient of USDF’s highest honour.

Suppenkasper was recognized during the 2020 USDF Year-End and All-Breeds Awards presentation, as part of the 2020 USDF Virtual Convention.

In recognition of this achievement, a commemorative personalized plaque, an embroidered cooler, and a gift certificate provided by Dressage Extensions will be awarded.

Also, Suppenkasper is the recipient of the Colonel Thackeray Award and will have his name engraved on a silver trophy to be on permanent display in the Roemer Foundation/USDF Hall of Fame, housed at the USDF National Education Center, located at the Kentucky Horse Park.

“USDF is thrilled to be able to recognize this extraordinary horse for his many accomplishments during this unique and trying 2020 competition season. We also congratulate Akiko Yamazaki, Four Winds Farm, Steffen Peters, and the entire Suppenkasper team,” stated USDF Executive Director Stephan Hienzsch.