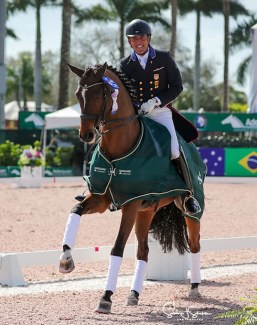 After scoring a hattrick two weeks ago at their first show of the 2021 Global Dressage Festival season,  Dr. Cesar Parra and Mr Bumblebee continued their winning streak last weekend at the 2021 CDI-W Wellington with a new best score for the horse.

From Fourth to Double Win

Competing in the Small Tour 3* CDI, Parra and Equventure LLC and Karen and John Blank’s Danish warmblood gelding Mr. Bumblebee (by Sting x Welt Hit II) claimed victory in the Intermediaire I with 71.853% and aced the Intermediaire I kur to Music with a personal best of 78.95%, almost a full 3% ahead of the competition.

"I was thrilled with those wonderful scores in the freestyle. They were a personal best," Parra explained. "I can’t be prouder of Bee. He is an amazing horse and I’m so blessed to have him as my partner. After a somewhat disappointing first test, he continued to improve throughout the week and he gave me everything he had today for one of the best rides of my career."

The show weekend could have been another hattrick but Mr Bumblebee ended up in fourth place in the Prix St Georges with a respectable 70.912%. There was an unusual score discrepancy between the five judges, with Austrian judge Claudia Thaler on 66.765% as low score, while the seasoned 5* judges Lehrmann and Umbach had the pair at 69.412% and 70.294%, judge Gabriela Valerianova at 72.500%, and U.S. judge William Warren even at 75.588%.

"I thought we had a good ride today. I think this big show atmosphere is not always easy, especially earlier in the week, and we had little moments of tension that prevented us from doing even better," said Cesar. "Of course I'm happier with the judge that gave me a 75% but this is the sport. You go in again the next day and try your best."

The 3* small tour at the 2021 CDI-W Wellington featured a field of nine riders from four different nations.

The winner of the Prix St Georges and second place-getter in the Intermediaire I and Kur was German Kevin Kohmann, a 32-year old young professional dressage rider, who Cesar discovered in Germany and brought to the U.S.A. as his protegé.

Kohmann worked for Parra for five years, arriving at his barn barely able to speak English. He learnt the ropes there and got the opportunity to train and compete high quality horses, before setting up his independent business at Diamante Farms in Wellington.

"It's great to see Kevin do so well. We worked together from 2006 till 2012 and I'm proud that he has become such a successful rider," said Cesar. "Kevin did an amazing job this week, and it was fun to compete against him. I feel very proud whenever former students have such success. I have known many of them since they were very young and I know how hard they have worked to reach their goals.”

Parra is a firm believer that his students should be given the chance to ride good horses and over the years he had moulded and coached young riders into successful professionals, such as Kohmann, Roberto Brasil, Rodrigo Encinas Fuentes, Carlos Muniz, Nadine Buberl, Merita Hagren, and many more.

Parra credits his team of young riders for contributing to make his farm a successful sales and training business. One of the newest members to the team is Katryna Evans from Colorado, U.S.A.

"She is such a mentally strong rider and sits very well," said Cesar. "Katryna spent six years in Germany and got her Bereiter degree in Warendorf. She's thoroughly schooled dressage rider and an amazing girl. She's such a great addition to Performance Farm."

Last weekend, Evans shone in the national arena, winning an impressive 4 out of 4 classes with Parra’s up and coming prospects, Cesar's 5-year old Mollegardens Fashion (by Florenz x L'Espoir) and 6-year Fanta 4 (by Finest x Florencio), which is owned by Cesar and Gina Raful.

“It is always a pleasure to see these young talented riders shaping our future FEI horses. Combinations like these are what motivates me to continue teaching," said Cesar.

"I've been fortunate enough to have had many great opportunities in riding throughout my life and I have learned a lot from many different professionals in the top sport," Katryna stated. "It's wonderful to be a part of this team, the quality of horses are amazing and the pleasure of having Cesar's leadership and guidance is giving me the chance to get to the next level of true training and realize my real potential."