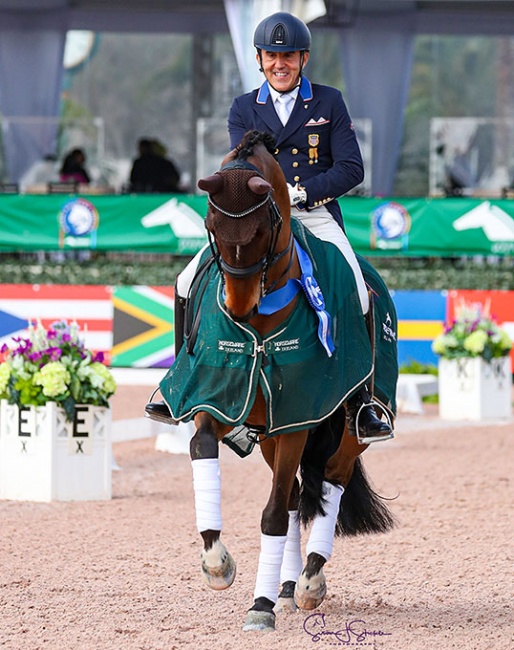 In their first international competition of 2021, Dr. Cesar Parra and Mr Bumblebee made it a triple victory at the 2021 CDI Wellington on 28 - 31 January.

It is a new season of the Global Dressage Festival in Florida, but  Parra and the Danish warmblood gelding Mr Bumblebee (by Sting x Welt Hit II) are picking up right where they left at the end of last year’s shortened season as they dominated the Small Tour CDI 3* with three convincing wins.

The pair impressed the panel of five judges from the beginning, scoring 71.00% in the Prix St Georges class on Thursday, followed by a 71.441% in the Intermediaire I class on Friday. Their weekend was capped off with an impressive 75.600% and a win in the Intermediate I Freestyle on Sunday.

This hattrick is a first reward of the year for Parra and his team at his Performance Farm that began shifting its focus in 2020 to a more diversified, holistic training of rider and horse.

"There’s no words to describe how pleased I am with our first weekend here at Global 2021,” said Parra.

The corona pandemic, which swept over the globe less than a year ago, forced riders to stay home with the majority of competitions cancelled in 2020. Making the best out of a difficult situation, Cesar savoured the time the extend his stay in the sunshine in Jupiter, Florida, for more training, before returning to the flagship Performance Stable in Whitehouse Station, New Jersey.

Parra has been taking a different approach to his training in recent years, diversifying the training with more hacks, hill work and long lining, so the horses retain their mental freshness and eagerness to work.  He continues to be coached by former U.S. team trainer and 5* judge, Anne Gribbons, and throroughly enjoys the USEF sponsored clinics with team trainer Christine Traurig.

"The clinics with Christine are such a great learning experience. She is amazing and I always take something home from her," said Parra. I want to evolve into a better version of myself for my horses each day. It is hard work. We all have our problem points as riders that are very difficult to retrain, but my wife, Marcela, has been watching me ride every day for the past 30 years and she has really developed an excellent eye."

Parra discovered Mr Bumblebee in Germany on one of his trips, shopping for young talented horses which he can develop up to FEI level. Bred by Trine and Allan Severinsen in Denmark, Mr Bumblebee was schooling at L-level at the time of purchase and is now working towards Grand Prix. John and Karen Blank saw the talent and quality in the bay gelding and acquired the horse as an investment and project of love through their company Equiventure LLC.

Another talent in the barn is the 7-year old Dutch warmblood mare Jida Selly A (by Zardando x Wynton). She was the bronze medalist at the 2019 U.S. Young Horse Championships under Cesar's student Merita Hagren and is now being trained to FEI level.

Mr Bumblebee was first campaigned by Cesar's long-time assistant Katie Riley. The horse exemplifies the team work that happens in Cesar's barn, where all members of the crew - from grooms, students to riders - are closely involved in the work and well-being of a horse.

"Dressage sport and the business around it are constantly changing," Parra explained. "We need to evolve with that and be open to learning. We all have different strengths and by teaming up and working together with the horse's well-being as priority, we all win."

Not only the horses' development up the level are a goal at Performance Stables, Cesar also prides himself in his students and assistant riders who get their moment to shine in the competition ring. In the past five years he has worked with Finnish Merita Hagren, Spanish Rodigro Encinas Fuentes, and Portuguese Roberto Brasil, offering them opportunities to ride and train horses from young horse level to Grand Prix, compete them in some of America's most prominent dressage shows, as well as train students and clients themselves at Performance Farm. The valuable experience they gained in the U.S.A. serve as a basis for jump-starting their professional career now in Europe.

Last weekend in Wellington student Olivia Lynch won both of her classes on Sunday in the National part of the show on Parra's horses showing for the first time in her life.

“It has been a trying year for everyone, full of uncertainties and difficulties because of the virus, but our team has stayed committed to our horses and to our family and this is why we can enjoy these successes today," Cesar explained.

Dr. Parra is quick to credit the many people that have helped him to achieve his goals.

“I have always believed that you need a very strong support system in order to be successful in our sport," he said. "I have an amazing team behind me that give their best everyday so that I can be here today. I would like to specially thank Karen and John Blank for their trust and for letting me ride and compete my wonderful partner Mr. Bumblebee. Also, my good friend and longtime coach Anne Gribbons, who has tirelessly guided me for years now. Our grooms, riders, owners, coaches; we are all a family at Dr. Cesar Parra Dressage Sport, and I am very grateful for this.”