Re-Training the Dressage Horse: Much Time and Patience for Small Steps 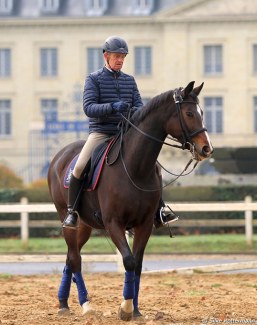 In February 2016 Christian Carde, former chief rider at the Cadre Noir of Saumur and former national dressage coach of France, worked for the first time with the then 12-year-old Oldenburger mare Milady. Four months later he was given the opportunity to buy the horse. Beginning of a partnership which main initial problem had been the lack of activity in the mare.

No Impulsion, No Horse

How to arouse the pleasure of working with a rider and foster the will to go forward in Milady? Impulsion starts with the inner attitude of the horse to listen to the rider. In this early phase of retraining the feeling of the rider is of exceptional importance: He has to listen to his horse and only focus on the quality of the reaction and the forward going.

In equitation the development and cultivation of impulsion is the most important thing which a rider has to achieve. „No impulsion, no horse“, recognized one of my most famous predecessors at the Cadre Noir, General Alexis L’Hotte, in his legendary opus „Questions Equestres“ which had first been published in 1906 and is part of the French doctrine .

I want to define this term which many riders correlate only with the physical procedure of the forwards-upwards stepping hindquarters more precisely. In the equestrian tradition of my country impulsion begins with the inner attitude of the horse to listen to his rider and to react promptly and willingly to his rider's requests. This intrinsic motivation to provide his forces to the rider then leads to this energy which the hind-legs generate. For that reason I prefer speaking of „activity“ instead of „impulsion“ because this term includes the mental as well as the physical procedure within the horse.

From the beginning of our partnership my focus had been on giving Milady back her joy of working and foster her will to go forward, because without both correct riding is impossible.

To get a positive attitude of the horse towards his daily work, many equally important aspects are decisive and some go beyond the training as such.
At the beginning of her re-training it had been important that Milady first learned to go diligently forward while getting a more refined correct contact.

Simplified: Only when the horse gets lighter in front and quicker behind, it is on the right path of training. Lightness to the hand and to the leg have to go hand in hand.
However, it is a fact that lazy horses are more willing to go forward in trot and canter because the forward movement is a consequence of these gaits themselves. When I speak of forward and active I do not mean that the horse goes faster, but with more diligence and energy.

Because my riding approach foresees a lot of work in walk to improve the contact and suppleness of Milady, it was important to pay extra attention to the rider's hand.

It had to maintain a very light contact in which the hand always had to take great care to follow the movements of the horse's shoulders. It turned out to be useful here, to make Milady first yield from the halt through lateral flexions and do this until she showed a prompt and correct reaction by yielding of the jaw. In order to not hinder the permanent forward motion, it had been of special importance not to give contradictory aids by simultaneously using the hand and leg.

Many transitions between collected and medium respectively extended walk and back into the collected tempo helped to improve the activity. At the beginning it will be easier for the horse to maintain this permanent soft contact by riding these walk- transitions on a circle line as it favours the yielding. Also the combination of renvers-pirouettes with normal walk-pirouettes foster on the one hand the correct contact as the horse yields through the required flexion. On the other hand the obedience to the rider's legs gets schooled. At the beginning one should rather ride the pirouettes too big than too small to keep the horse enough forward and active.

As soon as Milady showed a positive change of her inner attitude and reacted more willingly to my requests, she was ready to execute many walk-trot-transitions with the goal to make her even more attentive. At the beginning I only asked her a few trot steps each time and completely opened my fingers. Over all with not correctly trained horses who have turned sour and lazy as a result one should only ride them into the contact when the horse is enough forward. Thus for a few months I allowed my mare to start trotting with a fairly free head-neck-carriage with a long neck. It was not very important during that phase when Milady occasionally dropped the contact as long as her trot steps came free and were forward.

In the course of some months she took the correct contact more and more easily while working on the circle and or during exercises which require a lateral flexion.

In this earlier phase of re-training in which the horse slowly discovers his joy of going forward again, the rider's feeling is of particular importance. The rider has to exactly emphasize with his horse and entirely take care of the quality of his reaction and the one of his will to go forward.

For example, as soon as Milady immediately reacted to the impulse of my leg, I was already content with one or two trot steps and praised her for it, allowing her to walk again before the steps would turn to lazier ones. That way I tested her reaction to my leg impulse several times after each other. She not only had to learn to react to this short impulse of my leg promptly, but as a second step then also maintain the forward motion when the legs were only softly breathing her flanks.  Some riders think they have to give impulses for every step. But that way they only train a horse to become dead to the leg aids and then need to apply stronger and stronger aids to be heard by the horse.

If a lazy horse does not react to the leg impulses at the beginning, one is not allowed to succumb to the temptation to increase them exaggeratedly. Instead the leg impulse can be intensified by a short purposeful tap with the whip and also the voice can be used to encourage the horse to be more active.

The rider has to absolutely prevent that the horse tires or gets tense, either physically or mentally, at any phase of a training unit. For this reason I take greatest care until today that I do not exercise something too long or ride Milady in the same frame all the time. Phases in which the horse is allowed to stretch forwards-downwards into the hand or walk freely should not only be allowed at the end of a lesson, but after each phase in which the horse was ridden with elevation and collection.
It prevents stress and tired muscles.

Aids Should Be Refined All The Time

Due to the fact that activity starts with the intrinsic motivation of a horse, one should not succumb to the temptation to force the lazy horse forwards with exaggeratedly hard leg-, spur- or whip-aids. The rider has to be aware and remind himself again and again that lightness to the aids is no final goal, but one of each single lesson and that the aids should be refined all the time.
Spurs in turn should refine the leg aids which is only possible if the horse has learned and is confirmed to obey to the slightest impulse.

In Milady's case her activity in her previous training had been produced mainly with the spurs and as a consequence she had been dead to the leg. So for the first ten months I rode her completely without spurs.

She should learn to react to the slight pressure of the calf. To find a way to achieve this despite her initial insensitivity I remembered the advice of Charles Raabe (1811-1889) who had had opinion that the best position of the rider's lower leg is slightly behind the girth.

I tried this and actually positioned my leg more behind the girth than usual when giving an impulse, only to immediately place them back into their normal position.

To my delight Milady reacted positively to this uncommon leg position which turned out to be very helpful in her further training.

The words „strolling“ and „activity“ might sound contradictory, but during a hack in horsy company not only is a mental relaxation of the horse easier achieved than when working in the arena. Also the lazy horse's will to go forward comes along like on its own. Milady had been used to such hacks from the past and turns out to be the reliable companion during hacks on the extensive terrain of Le Breuil near the cavalry school and it complements my work in the arena.

However, these hacks do not replace a training unit and really only serve to give Milady a mental break from her actual work.

At the time of writing this article Milady and I have been partners for about one year. It has turned out again that re-training always requires much time and affectionate patience, otherwise small progress is easily destroyed again. Big steps or even miracles cannot be expected; instead one has to be happy and grateful for even the smallest progress and has to try to consolidate it. This was also valid for developing more activity. After one year of working with smallest steps, in a snaffle and without spurs, Milady now slowly shows those intrinsic motivation which results in mental and physical activity and allows me to start working on the higher collection.